Background: Muay Thai exploded into western consciousness with the rise of UFC and Mixed Martial Arts in general. What had been viewed in the past as an eclectic Martial Art suddenly blew up as one of the most functional and dangerous fighting styles in the world. As fighters learned to overcome the grapplers and wrestlers in MMA it gave rise to infamous "Sprawl & Brawl" fighters before gradually growing into more complete fighters. 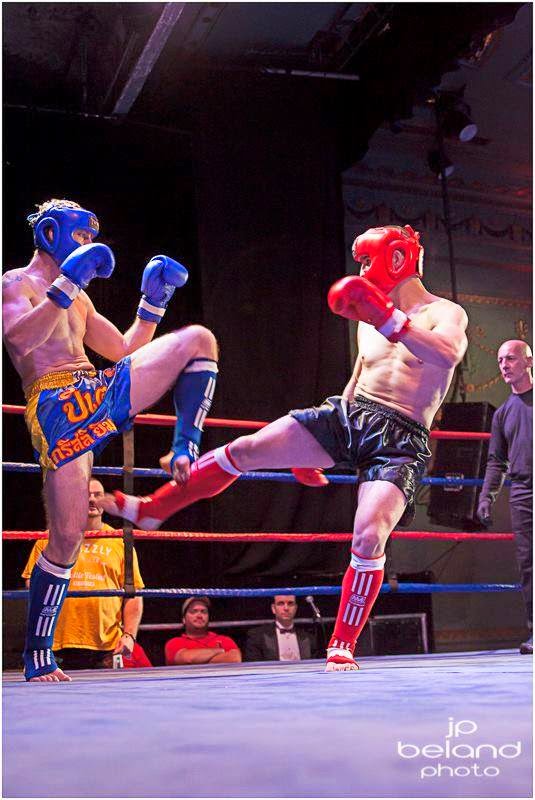 What is it that makes Muay Thai so dangerous in the ring over some of the other fighting styles like Kung Fu and Karate? Is it that Muay Thai is fundamentally better than other Martial Arts? As a fighter with a background in Chinese Martial Arts I have always been curious on this. Surely no fighting style is better than another? Yet, if that statement holds true, why does Muay Thai produce so many champion fighters?

I reached out and contacted an old friend of mine, Mike Martelle, in order to get a better understanding. Mike and I competed against each other and have trained together on numerous occasions. Mike now runs his own gym in Kingston, Ontario and has led the Grizzlies into battle all over North American and beyond. Mike himself has fought around the globe, competing from Russia to Central America making him ideal to ask about the strengths of Muay Thai. 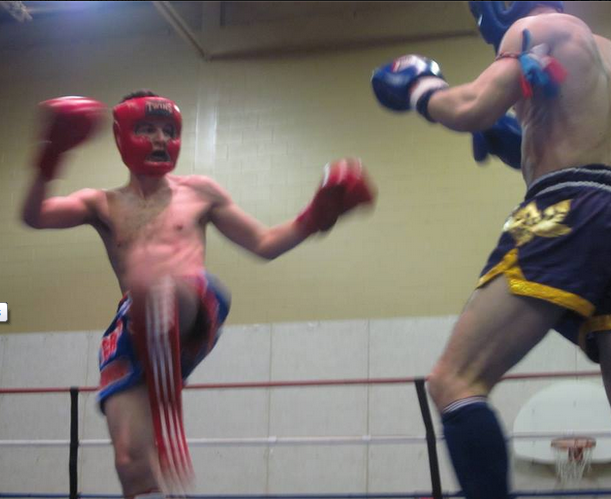 Kru Cody whipping a kick out at his adversary.

Mike was more than willing to oblige me and, even better, he let me bring a couple of friends of mine. This let us host a whole gathering of Travelling Ronins. Kru Cody and Kru Pete were teaching the Muay Thai class and provided a wicked experience where we worked through some basics and then drove us into some more advanced techniques. It was a great day of Chinese Sanda fighters learning from Muay Thai fighters and a mixing of techniques. 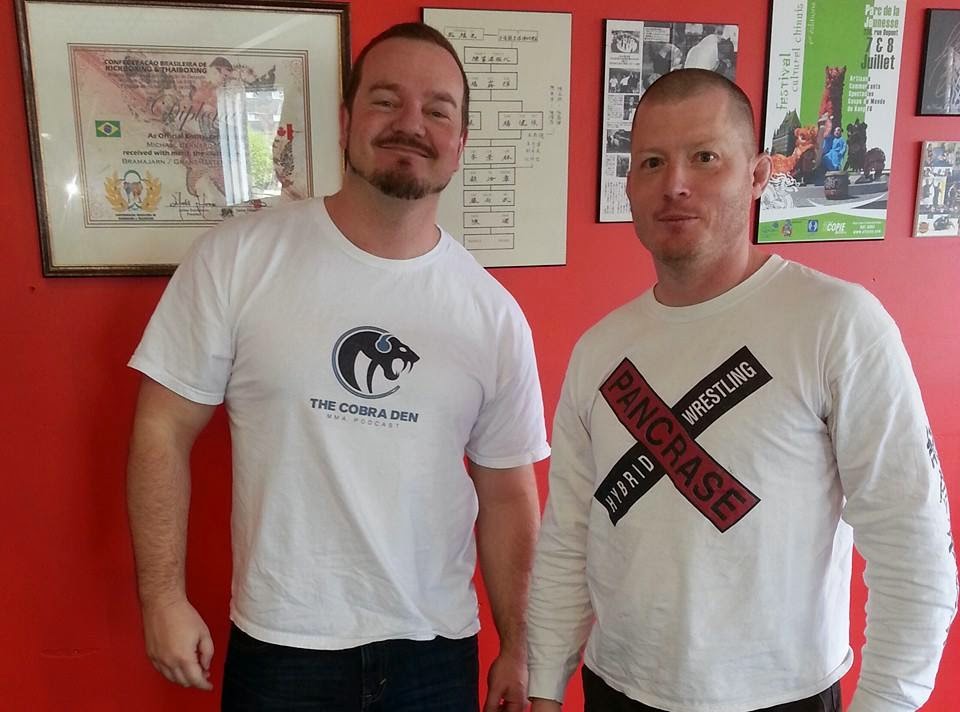 Mike Martelle (left) and Eugene Shewchuk (Right) have both
played a great roll in developing me as a fighter.

Now, Mike was extremely gracious and let me film everything. However, all but the group photo are taken from the Grizzly Gym facebook page. Unfortunately, my camera was lost in a completely preventable fishing accident and the footage I shot was lost as well.

What did I Learn: I am extremely comfortable in fight gyms having trained in so many over the years. So I always like it when a fight gym can take things to the next level and really push me. After warming up with some standard callisthenic exercises we dove straight into working on a series of wicked combo drills. With the rotations it forced us to work with a variety of partners and body types to get our technique down. 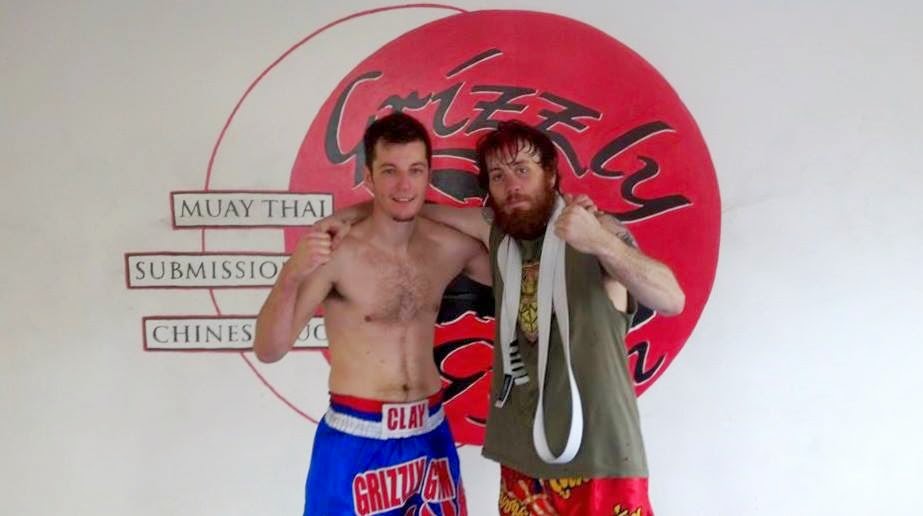 Kru Cody (left) ran us through some awesome drills.

I also loved that the Grizzlies work into some incredibly tough and complex combos. I have seen a lot of schools that stop at four strike combos. Kru Cody had us blasting way beyond that in order to help develop the "killer instinct" necessary to win fights. "Killer Instinct" isn't about being violent or brutal, it is about continuing to press the assault when you have momentum. Far too often fighters will throw a couple of punches and than stop to assess the damage they have done allowing their opponent to gain their breath and reset.

What was similar: With my background in Chinese Sanda and MMA there were a lot of techniques that were familiar to me. With a few technical differences on how you throw a kick or a punch Muay Thai was easy to slip into. The Grizzlies were preparing for a fight that was coming in two weeks and you could see the competitive spirit radiating from them. 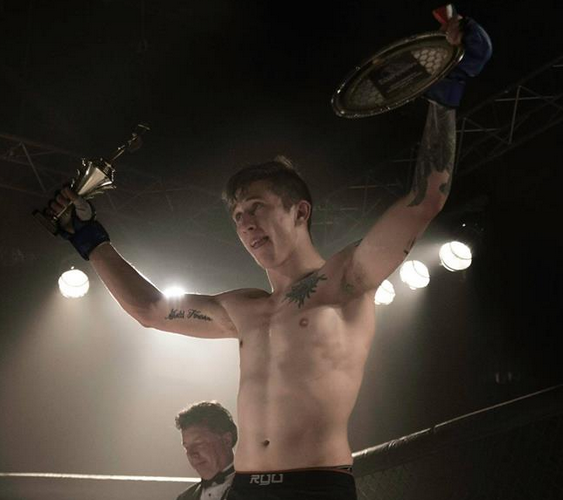 Fighters carry themselves with an easy confidence and it is wonderful to be around. Neither Kru Cody or Kru Pete had any ego in working with the fighters I brought down and so we were free to exchange techniques and learn. It was fantastic that Coach Mike Martelle had imposed such a great atmosphere to come train in. All my crew left asking when they could meet with the Grizzlies again.

Conclusion: Friendships like the one I have with Coach Mike Martelle are what make Martial Arts so much fun. I had a question on Muay Thai and he brought me in without hesitation. It is the mark of a true Martial Artist.

To answer why Muay Thai fighters are so dangerous the answer was clear. Preparation and structure allow the style to turn out fantastic Martial Artists. I often saw Kru Cody refer to a lesson plan throughout the day which implies goals for the lesson and a focus on fighter development. It also means he wasn't just "winging it," rather approaching the training in a results orientated strategy. Muay Thai makes great fighters because they have a goal, measurable objectives to achieve it and structured approach to their training. I certainly will take that lesson with me. 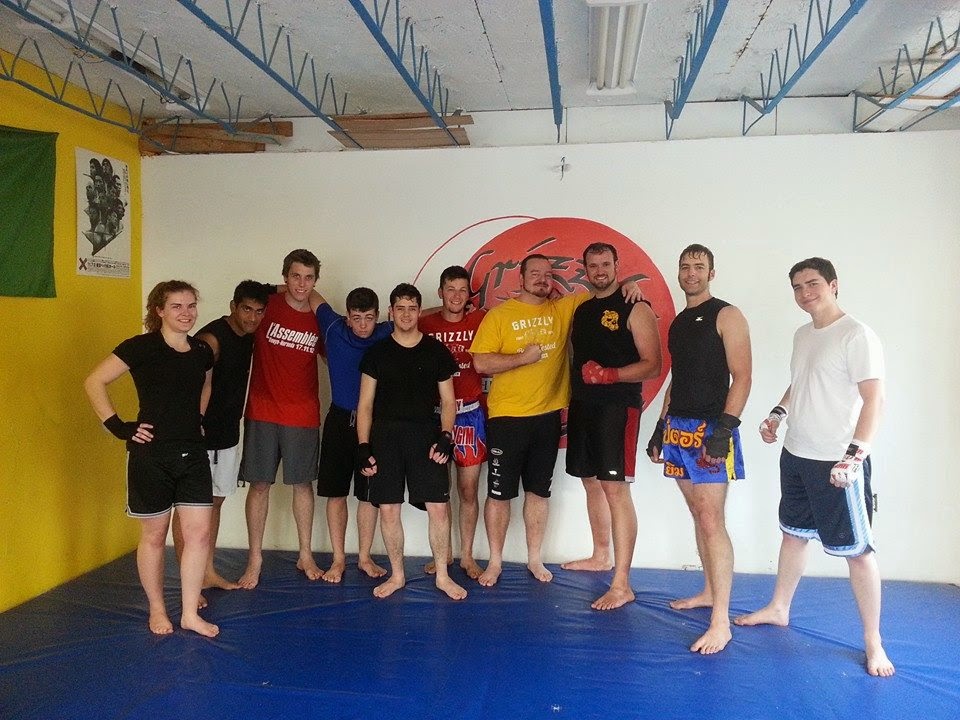 A great day training with some old and new friends!

Martin "Travelling Ronin" Fransham
If you are interested in training together I would love to get together with you. Drop me a line on facebook and we can connect. I would love to learn from you.

Go take a look at Grizzly Gym: http://www.grizzlygym.com/
Posted by Unknown at 7:29 PM No comments:

Background: I have loved fighting with weapons for as long as I can remember. However, most of my introduction to weapons had come in the form of Medieval Martial Arts and Chinese Martial Arts. I had almost no experience with Filipino Martial Arts. Sure I had heard of Kali but other that knowing they did “stick fighting” I couldn’t have told you much about it. 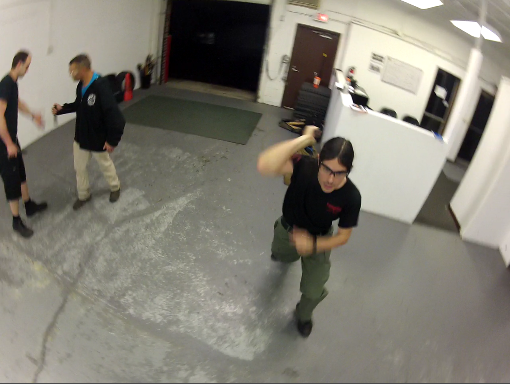 Paul Ingram charging forward to slash me to ribbons.

Kali has many other names and you will sometimes hear of it referred to as Arnis or Escrima due to the Spanish influence in the Philippines. Like all of the Martial Arts I visit I was surprised by how rich and diverse the culture of fighting goes in Kali. This was anything but mere “stick fighting.” Filipino Martial Arts are as different and incredible as any of the Chinese Martial Arts I have studied.

What I have always found extremely interesting is how cultures adopt from each other. During the colonial era Spain influenced the Philippines enormously. The sea-faring nations exported their cultures around the globe bringing various ideologies and technologies with them. Today, the situation is reversed. Kali is being exported around the world and has become a part of the Martial Arts of several militaries. 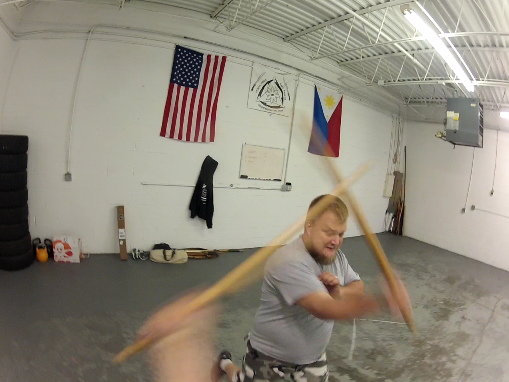 We started warming up with a basic pattern to develop timing.

Pekiti-Tirsia Kali is one of main systems of Kali and was officially created by the Tortal Family in 1897. The current head of the system is Grand Tuhon Leo Gage Jr. who has been extremely devoted to growing this system of Kali. Beneath him gentlemen like Tuhon Tim Waid have been teaching the Filipino Marines and giving seminars around the world.

Paul Ingram was one of the people that got hooked on Tim Waid’s teachings and has dedicated himself to PTK. Paul is quite short and sought to level the field between him and larger fighters. When confronted with kickboxing or grappling he found they favoured a larger fighter. Indeed, the UFC will never place Demetrious Johnson against Jon Jones. Weapons provided that equalizer he was looking for. Suddenly speed killed and every strike was devastating. PTK turned a smaller fighter into a human weapon. 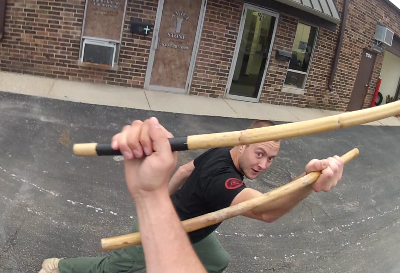 What I Learned: Pekiti-Tirsia Kali is described as a system not an art which I found very interesting. Paul stressed several times throughout the evening that a system is what you use and an art is what you create. The example that stuck with me the most was that of a painter. A painter / artist will use a system to create the piece they are working on. A baroque painter and a modern painter will both create “art” based on how they approach the canvas yet the result will be radically different.

The same is true with Pekiti-Tirsia Kali. Students are encouraged to learn the system and then create their own expression of the art. Larger fighters, like myself, might hit harder and stronger whereas a smaller fighter becomes fluid and flows faster.  It was this incredible dynamic of structure mixed with self-expression that I really enjoyed from RFA Martial Academy. 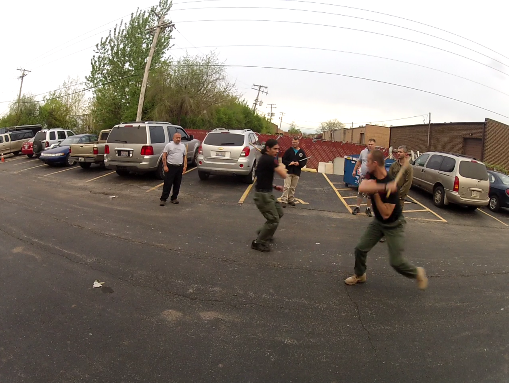 The name stands for “Require Further Achievement” and is designed to push you and to not except limits. The limitations we face are largely self-imposed and RFA Martial Academy asks you to always continue learning and growing. There is no end just simply a new challenge to look at and conquer. Paul Ingram lives the philosophy that you should never stop growing and improving.

What was Similar: RFA Martial Academy matches some of the top schools I have been to because of their openness to questions. Paul is a believer that you should challenge and push your teacher. The strength of any system, whether it is Kali or another Martial Art, is its ability to withstand questioning. If your style and primarily your teacher cannot accept being pushed to answer hard questions then perhaps there is a fundamental flaw in what you are learning. 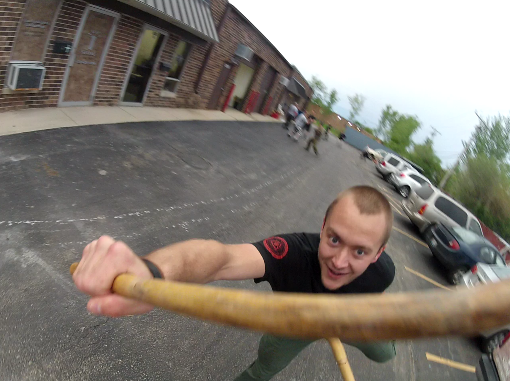 Tom slashes my face. He stopped with perfect precision.

Teachers need to be open and welcoming with their students’ questions. It is something that my first teacher, Sifu John Hum, strove to install in me. When I took up grappling, Coach Eugene Shewchuk, was always there and answering questions. As an instructor your students should be helping you grow and making you a better teacher.

Conclusion: A big reason I try to train with new groups and new people all the time is because it helps pull back the veil of ignorance and helps me grow as a Martial Artist. RFA Martial Academy showed me that Kali is way more advanced then I had ever imagined. I can't wait to see more of it. 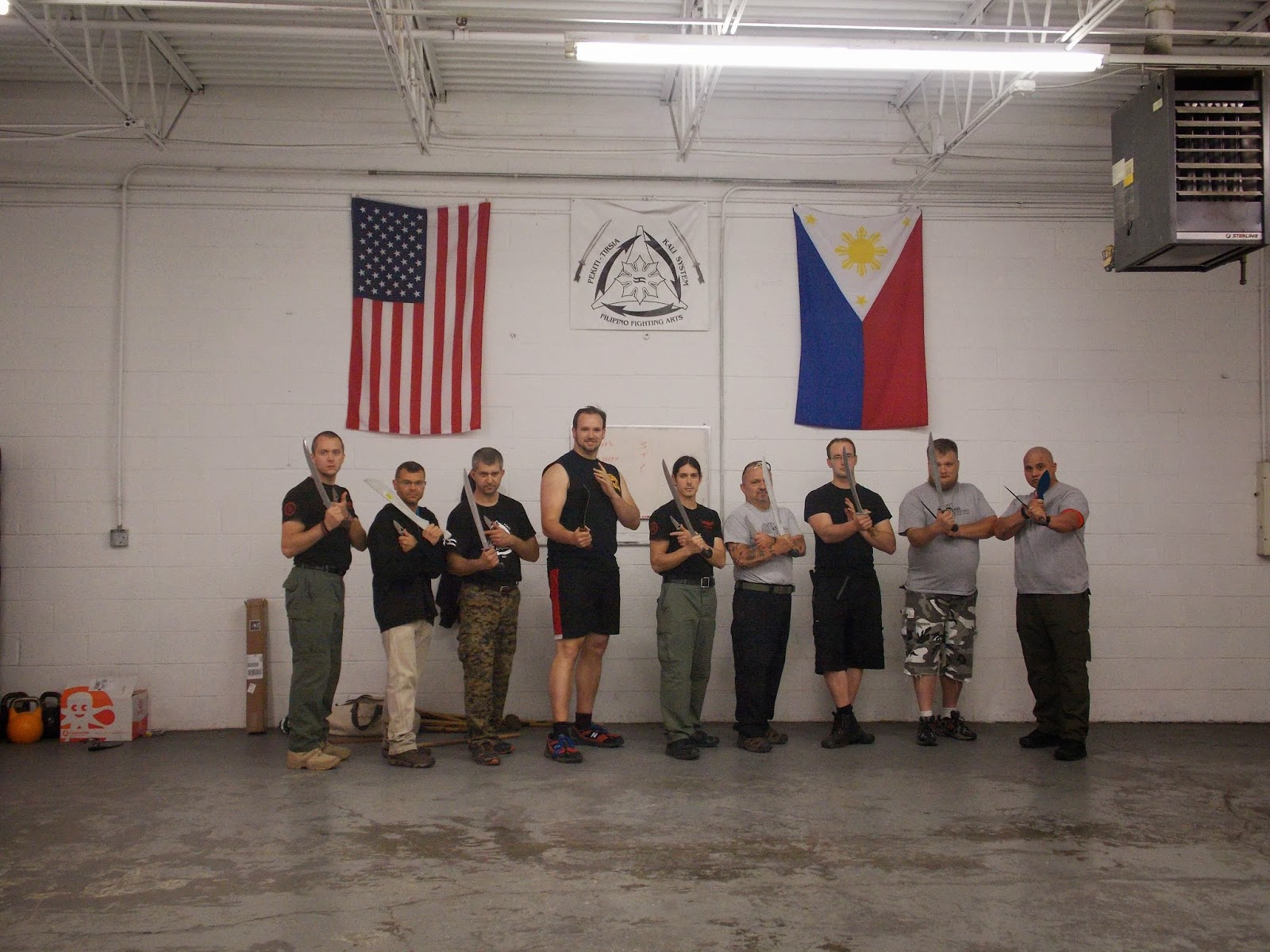 Awesome night training with a fantastic crew of people at RFA Martial Academy.

Check out RFA Martial Academy: http://www.rfamartialacademy.com/
Posted by Unknown at 8:39 PM No comments: