It is also one of the two Asian Martial Arts to be an Olympic Sport. With competitors coming from almost every country the influence that Tae Kwon Do has had on modern Martial Arts is undeniable. A quick search on Youtube will turn up dozens of videos featuring wicked knockouts and vicious kicks. Of course someone will also point out that there is a lot of videos of absolutely awful Tae Kwon Do as well. In my opinion, by having so many practitioners you will see both good and bad. I choose to spend my time learning and working on the best aspects of an art not pointing out a Youtube failure. 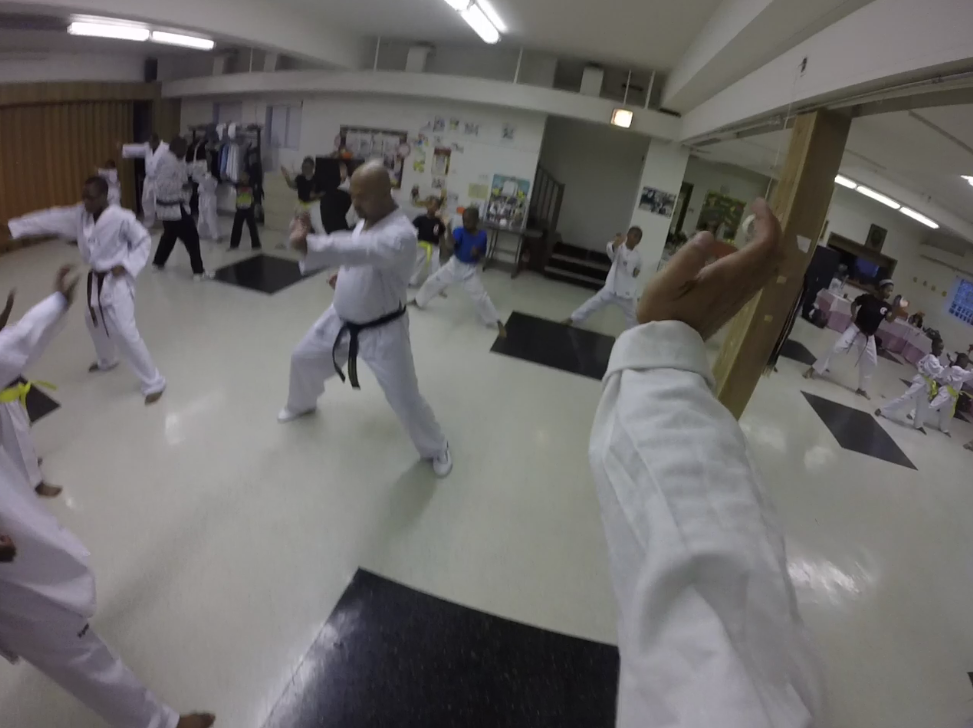 We start working on some basic strikes.

Tae Kwon Do is well known for its spinning techniques. Watching fighters fire off spinning back kicks or hook kicks is fantastic. Many criticisms were leveled against Tae Kwon Do in the early days of Mixed Martial Arts. However, today Tae Kwon Do has become an piece of many high profile fighters' game. Anderson Silva, Anthony Pettis, Benson Henderson, etc... are just a few of the many MMA fighters that have trained in the art and employed the devastating kicks,

I met Instructor David Pugh at a seminar on gun disarms. Throughout the evening we ended up working together and I developed a great respect for him. At the end of the night I found out that he was teaching Tae Kwon Do on the south side of Chicago and knew I had to go check out his class. 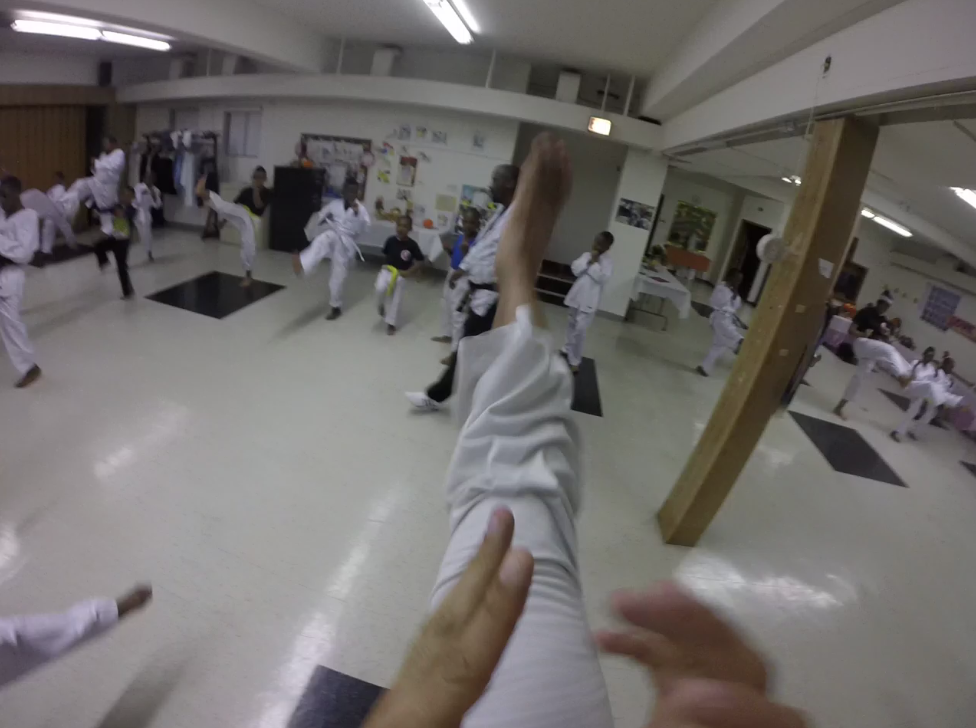 Throwing out a front kick under the watchful eye of Instructor Pugh.

What did I learn: I have spent a lot of time around fight camps and one thing that always amazes me is the ability for fighters to tweak techniques to offer a new twist on them. As a bigger Martial Artist I have seen the power that spinning techniques can generate. Twisting your body builds up power like a coiled spring. However, how you uncoiled that stored energy can be very different.

I worked on two spinning techniques with Instructor Pugh that evening. The first was the "spinning sidekick" and the second was the "spinning back kick or mule kick." Early in my Martial Arts career I became familiar with the concept of tradeoffs. My first teacher, Sifu John Hum, taught me that there were no good or bad techniques. However, every technique has a series of tradeoffs that you must be willing to accept in order to reap the benefits. 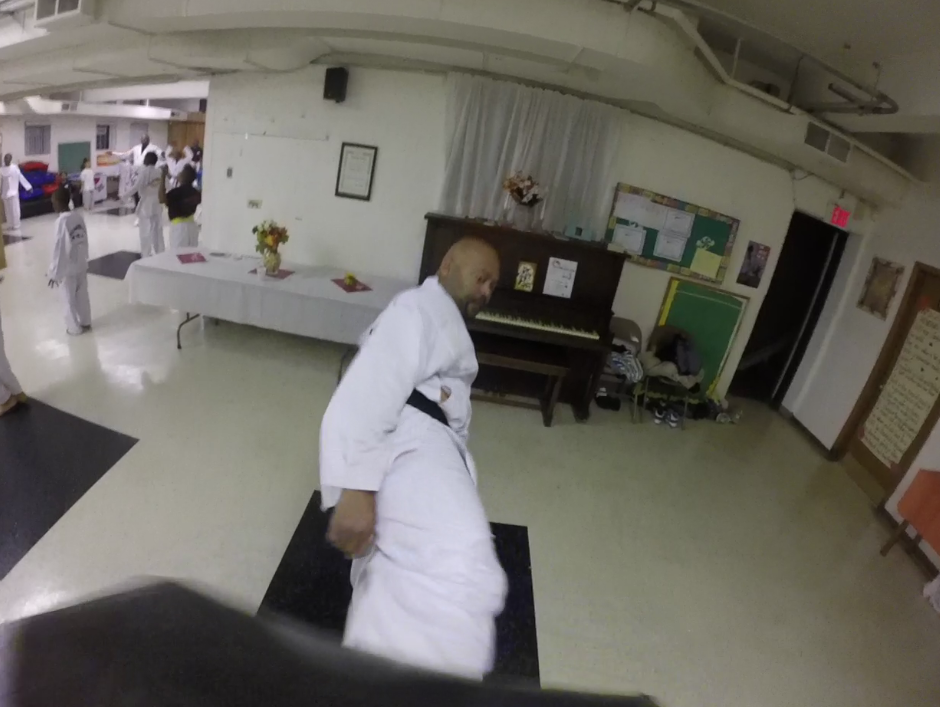 I get hammered with a spinning sidekick.

The spinning kicks we worked on really drove this home for me. The first variation was the spinning sidekick. You started up by coiling your body, however, to maintain the visual contact with the target you begin to uncoil before you fire the kick. The benefits are obvious, by keeping eyes on the target you have greater accuracy than the mule kick and more power than if you threw a normal sidekick. However, the tradeoff is that because you started to uncoil you lose some of your power.

The mule kick on the other hand starts exactly the same way with the difference coming in the execution of the technique. The mule kick fires the leg straight back with devastating force by capitalizing on the full amount of stored energy as you coil. Just like the spinning sidekick there is a tradeoff to get that extra power. Since you are kicking straight back you can't keep the same visual contact and are effectively unleashing the kick blind. 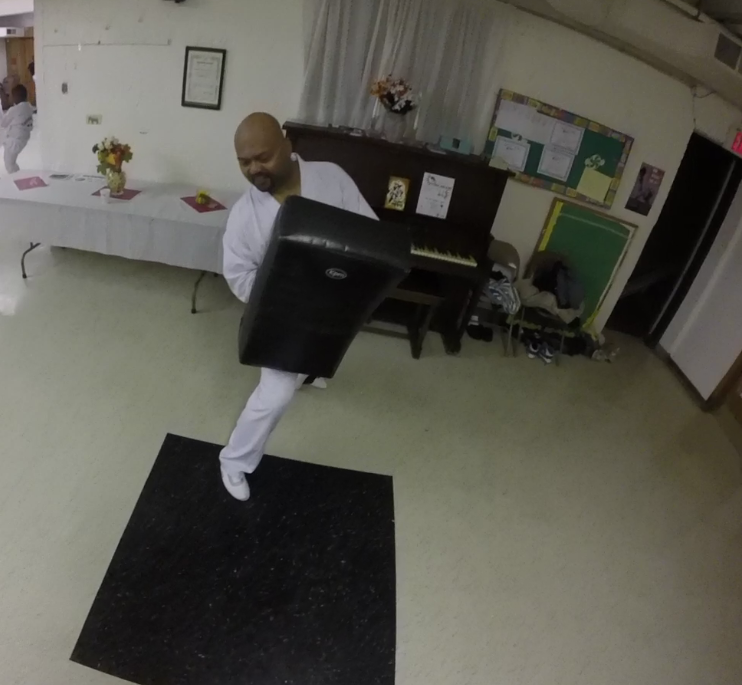 My turn to practice the mule kick.

Both techniques are equally valid and come down to the fighter to choose the application. A faster fighter will dodge the mule kick making the spinning sidekick the preferred technique in order to keep tracking and fighting your opponent. Later in the fight as the same opponent slows down and stops maneuvering keeping the visual contact is less important allowing you to slam them with a mule kick.

What was awesome: Normally I am training with adult classes with morals and ethics being focused on as an afterthought. Adults have largely formed their moral compass and just need to sometimes have it reset but rarely reformed. Participating in a family class was wholly different. 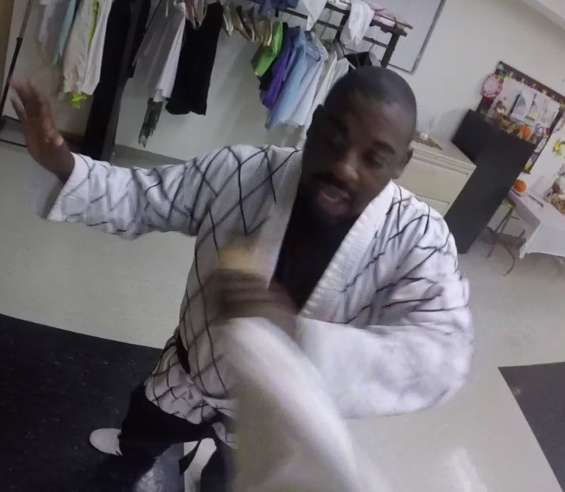 There is a knife in my hand which you can't see as Instructor Pugh hammers it away.

Many of the school's students are young and impressionable, looking up to the adults as role models.
That is where Instructor Pugh steps in and runs his class perfectly. The class opens and closes with the “Principles of Tae Kwon Do” where the students repeat what they are striving for. Courtesy, Integrity, Perseverance, Self-control, Indomitable spirit. Better yet, at the end of class Instructor Pugh goes through each one of the principles and how they apply outside the Dojang. 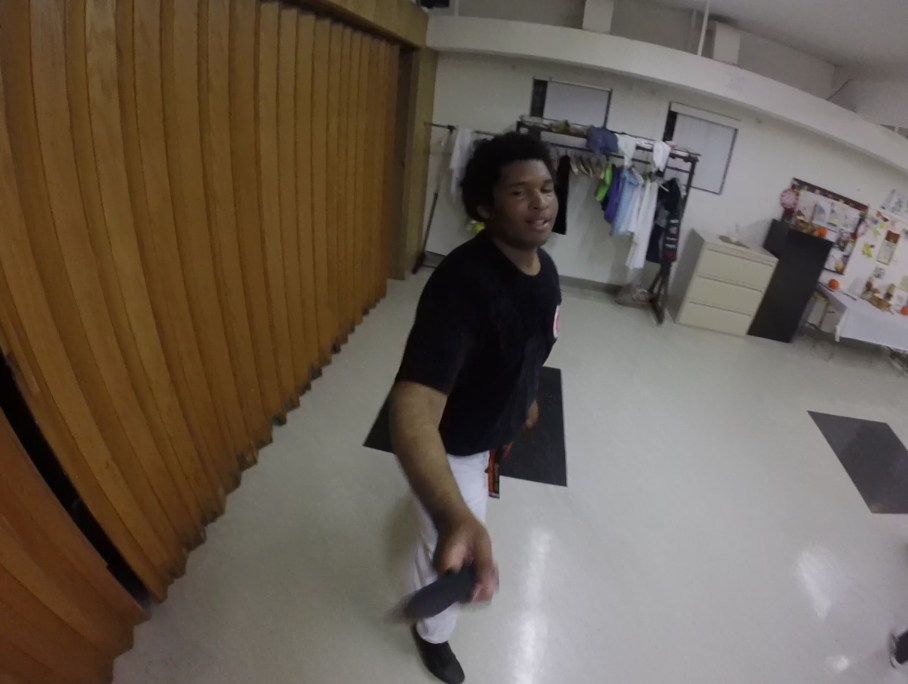 I am threatened with a knife by a student.

Martial Arts is supposed to make us better people and provide a variety of life skills. In a church basement in South Chicago I had the privilege to witness it. Warriors Martial Arts Club lives the principles they teach and I couldn’t be happier to witness Tae Kwon Do making a positive impact not only on individuals but also on a community as a whole.

Conclusion: I learned a lot about Tae Kwon Do in the night that I was with Warriors Martial Arts Club. This wasn’t the biggest lesson I took away. I learned much more about being a teacher and creating and image that people look up to and how to inspire the next generation. 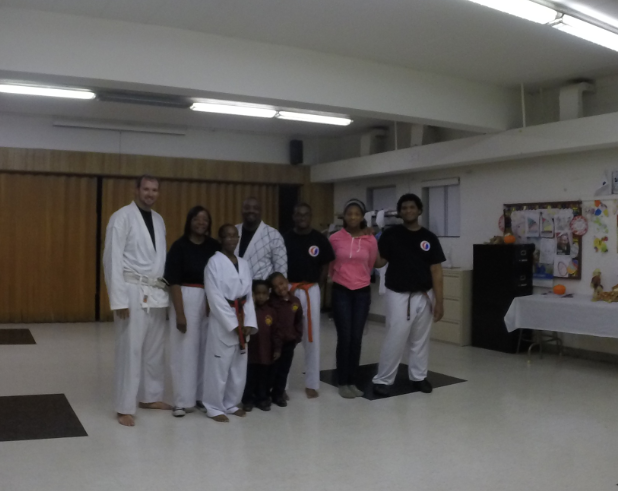 A group shot with just a fraction of the class.

Martin "Travelling Ronin" Fransham
If you are interested in training together I would love to get together with you. Drop me a line on facebook and we can connect. I would love to learn from you.