Background: Despite never having been involved in Combat Sports himself my father has always enjoyed a good fight. One day he came home with something new in his hand. It was  a VHS tape titled “The Ultimate Fighting Championship.” We plopped down on the couch and fired up the VCR with anticipation. I was taking kids Karate classes and with all the blind faith of a preteen child I prepared to see Karate dismantle every other fighter with crisp, clean hits. Instead, like so many other people, I watched a Jiu-Jitsu practitioner named Royce Gracie run through the competition in one of the most dominant displays of martial talent ever. Martial Arts changed for me right then and you could no longer excuse not having a ground game. 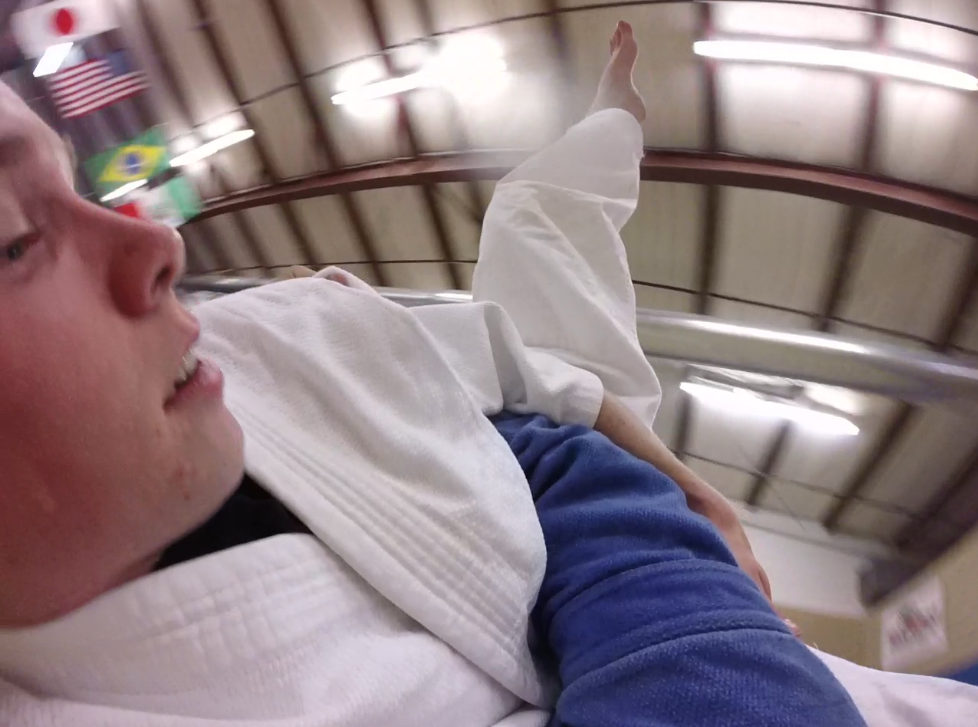 I get shown how roll an opponent from reverse-scarf hold.

Over twenty years later I had the privilege of visiting Infinite MMA Academy run by Adam Martinez. Coach Martinez is a PAN AM medalist and trained directly under Royce Gracie. On their website you will see claims that they are a home to Pro Fighters that have made it as far as the UFC and Bellator. Once you walk through the door you can see why Infinite MMA Academy produces champions. You have a clean, professional gym with a cage and ring that speak of dedication and hard work (Hint: Schools often visually provide a reflection of the staff).

Gracie Jiu-Jitsu has two primary facets to it. A competitive, sporting side to it where the Gracies have been instrumental in creating the UFC and most recently Metamorphosis, and a self-defence side. The self-defence aspects of Gracie Jiu-Jitsu don't feature in the limelight as often as the sport side but it is an important piece that grew from Helio Gracie, was carried by Royce Gracie and continues to be passed on by Coach Martinez and his staff. 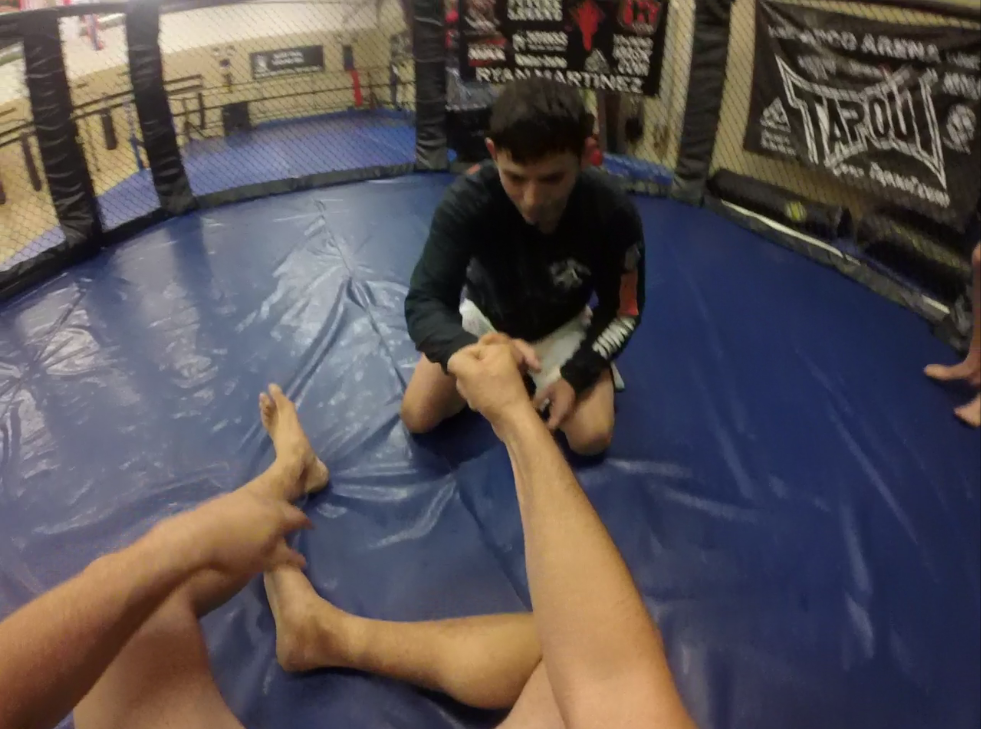 I shake, bump and roll with Coach Martinez.

As a traveller I get to meet people around the globe and being active in forums I find that Jiu-Jitsu often is short changed by members of the Reality-Based Self-Defence (RBSD) community. You will hear arguments like “Jiu-Jitsu only works on the mats” and “what if the guy has a weapon? Jiu-Jitsu is useless.” This has always struck me as both misinformed and ignorant. First, there is ample footage and stories  of Gracie challenge matches where they fought on all types of terrain from hardwood floors to the streets. Second, we have very recent stories of fighter’s disarming and submitting armed robbers including one where UFC Champion Jon Jones took down a purse snatcher in the streets. Third, and sometimes forgotten by the RBSD crew, most fights don't end in horrible eye gouging, genital mangling terror. In the vast majority of cases restraining someone is in order. Any police office, bouncer or security professional spends the majority of their conflicts restraining a belligerent not shredding them to pieces.

Gracie Jiu-Jitsu helps prepare their students for a vast number of scenarios. It could be restraining a drunk friend to multiple attackers. Coach Martinez stressed that you didn't always want to go to the ground in a grapple. However, Gracie Jiu-Jitsu gave you the ability to choose those moments instead of ending up on the ground against your choice. 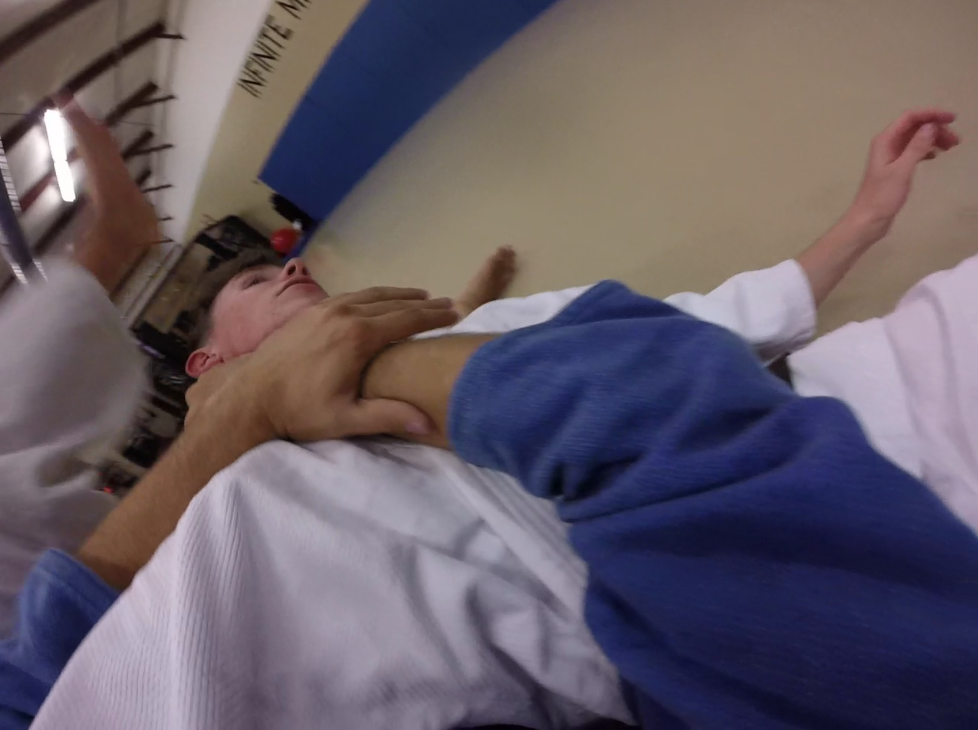 I swing my leg over to lock up an armbar I was shown.

What did I learn?: Infinite MMA Academy is a true Mixed Martial Arts school. While there I followed their Jiu-Jitsu, Judo, no-gi grappling and Muay Thai programs. Needless to say, I learned a lot in my two days. However, if there was something I learned it was during their Gracie Jiu-Jitsu and Judo classes. Wrestling with a Gi has always been my weakest area. Although I have a background in Russian Sambo I have always concentrated on the no- gi areas. My personal neglect of of the jacket has led to some major holes in my game that are exposed by people like Coach Martinez. The wonderful thing about Jiu-jitsu is that you can wrestle with anyone as Coach Martinez and many members of his school obliged me with a roll. I am a big heavyweight standing 6’6 (2.2m) and weighing in at 275 pounds. Coach Martinez is perhaps 150 pounds and certainly not my height or build. Looking at us you would think that I would crush him based on my size advantage. Instead, I was flipped and tossed around to be submitted in any number of ways from armbars to chokes.

Both him and Coach Troy (The Judo Coach) demonstrated to me that the principles that made Jiu-Jitsu and Judo so strong was the emphasis of leverage over strength. By using the correct leverage fighters can multiply their strength several times over without gassing out while stronger opponents struggle and deplete their cardio reserves. 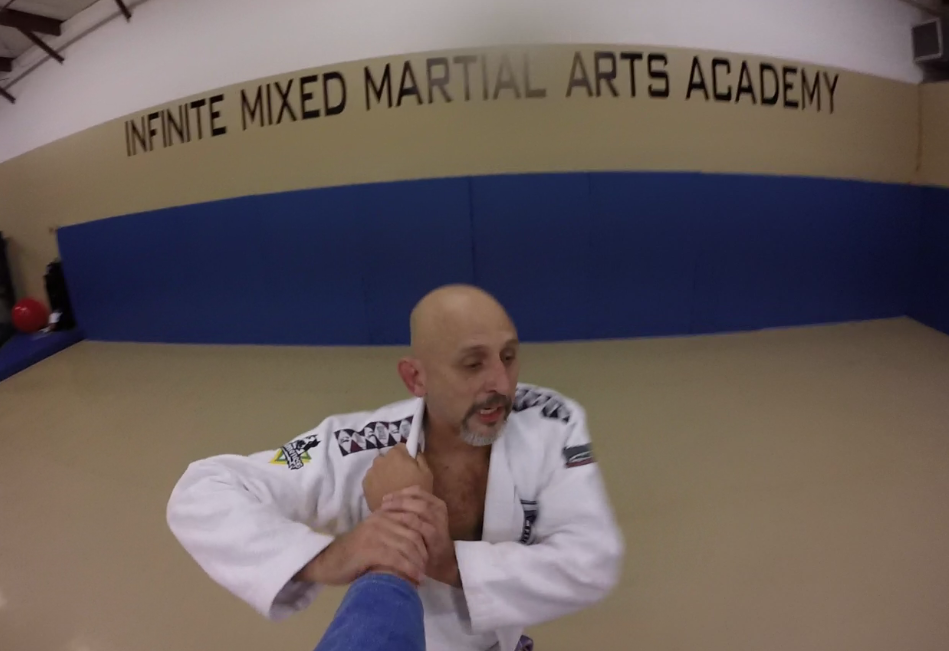 What was awesome?: Attitude makes a successful gym and fostering that atmosphere is impossibly important. I have been to gyms filled with great fighters but have such a poisonous atmosphere they implode under the weight of their own negativity. Rickson Gracie published a great article on how to train and how you don’t need to try and kill your partner. Instead, you should be training to learn and to help your partner grow. A close friend and teacher of mine, Sifu Nik Farooqi, calls this not “Training for Pain.” It does nobody any good to let your ego run rampant and hurt your partner. 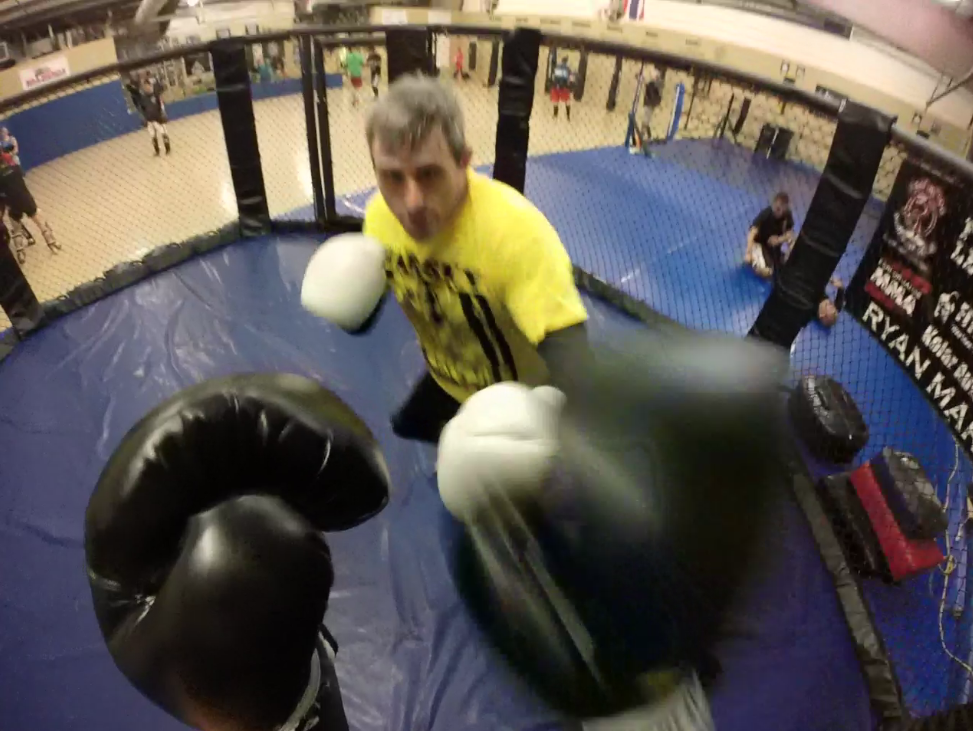 Pro Fighter Nick "The Natural" Laney snaps a jab out.

Being hurt is always something that scares me in being a “Travelling Ronin.” As I stood across from Pro Fighter Nick “The Natural” Laney I was wondering how sparring with him would be. We had spoken briefly before the round agreeing that neither one of us was there for a fight, yet, I had my reservations that I would be in trouble if Nick  decided he wanted to “impress me” or “teach me a lesson.” Instead of a fight we had an awesome round of sparring. From the moment that we touched gloves to the takedowns and ground and pound everything was beautifully controlled

Coach Martinez told Nick that he wanted him to work on hustling someone against the fence and takedowns. With Nick keeping his composure it allowed me to work with him and to not mind being thrown because I knew I was in good hands. It also meant that when something happened I wasn’t expecting, like the ground and pound, I wasn't hurt. For my part, despite all my travels it was the first time I had trained in a cage. I have always fought on opened mats and rings. Therefore, as Nick was working the drills for his upcoming fight I was studying everything he did and getting a first rate education on cage strategy. After the round we both left in good shape and in good spirits. Creating and keeping that attitude is key to creating a great school and Infinite does it incredibly well. 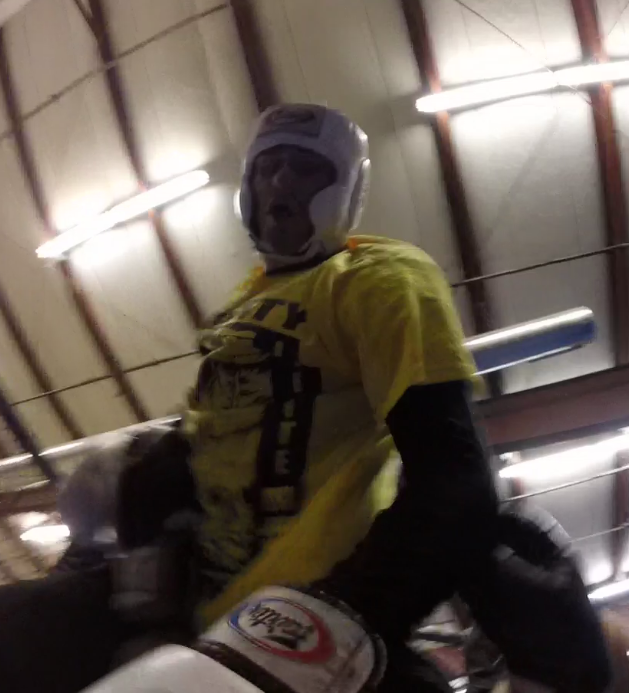 Looking up at Nick as he rains punches down on me.

Conclusion: Infinite MMA Academy is one of the top places to train in the North Denver area. If you are in the area you should certainly go check them out. The mix between competition sports and self-defense is a great balance in a gym with a great attitude. 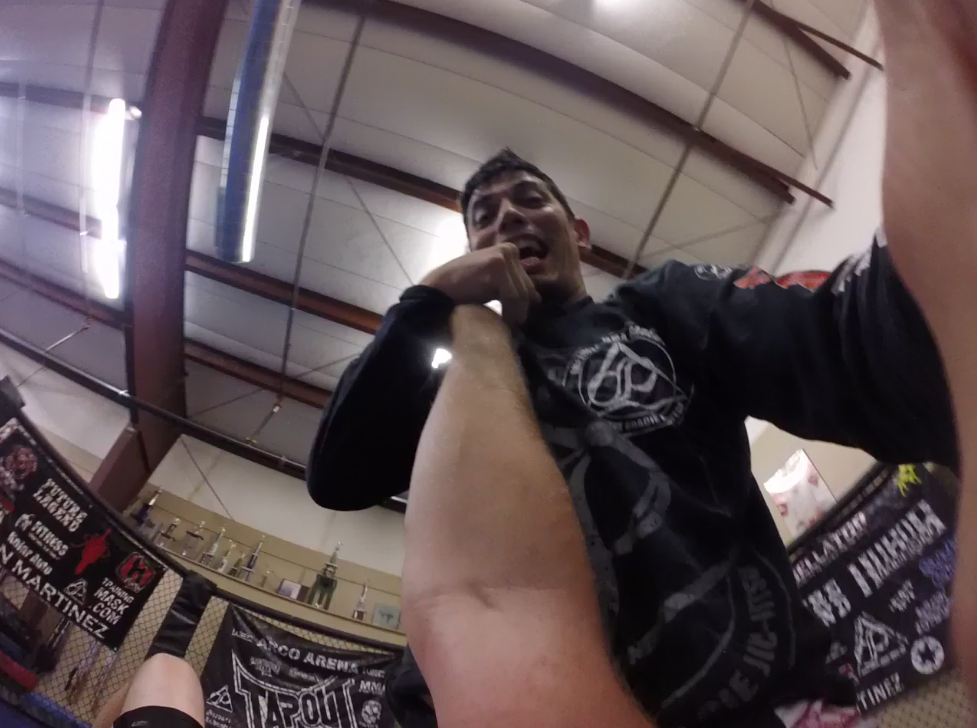 Coach Martinez locks up a great armbar as we close out an awesome night of training.