Background: I found myself at Northshore Academy of Martial Arts (NSA) courtesy of a friend of mine, Randy Siordia. Randy and I got connected through social media, and he invited me to come see what NSA did. When I pulled into the parking lot I saw what looked to be a small school sandwiched in a strip mall. Having trained in plenty of small schools, apartments and parks this wasn't a problem for me. However, when I opened the door, I realised that the school stretched much further back and this was anything other than a small school. 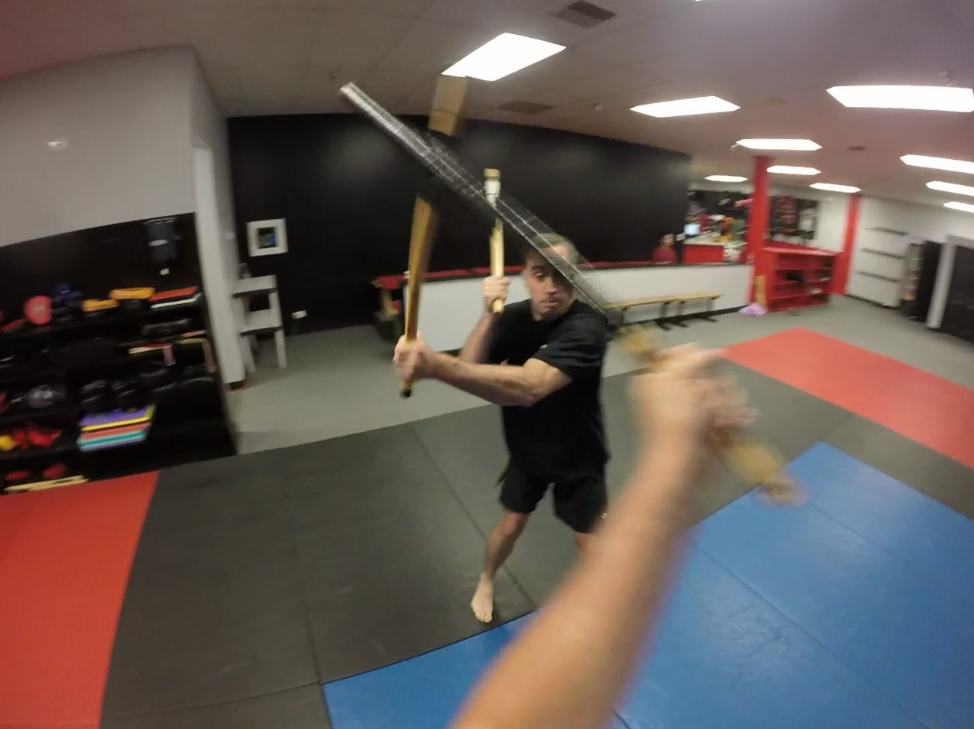 Physics at work. You can see our sticks bending on impact.

Northshore Academy is a modern training facility and is equipped to handle a variety of Martial Arts programs. Since I adore Martial Arts I decided to participate in the three programs being offered that evening. It was going to be an evening of Muay Thai, Jun Fan Jeet Kune Do and Krav Maga which meant I was going to get pushed to my limit.

What makes Northshore Academy a great place to train is that Head Instructor Marc Halleck has acquired a fantastic staff to back him up. Each class is taught by a well trained, experienced instructor with the other instructors participating in the class to prevent "instructor fatigue." Instructor fatigue isn't often considered but having travelled around the continent I can tell you greatly effects a class. When instructors get tired they stop engaging their class, the pace slows down and the class is generally disorganized. Whether or not you are even cognisant of it when you get tired and sloppy as a teacher your class sees it and soon they go somewhere else. 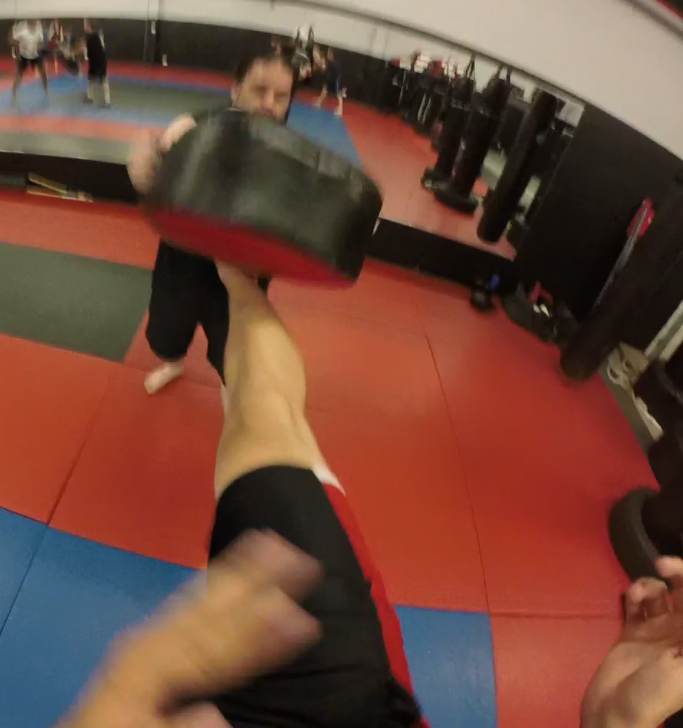 Practising groin kicks is a blast with these bags. Unload at full force.

The way Northshore Academy is structured prevents this. Whether it was intentional or not, it provides a great environment that is full of energy to learn from.

What did I learn: Between the three classes I learned a ton of new tips to bring up my techniques. Certainly the class that I learned “most” from was the Jeet Kune Do/ Jun Fan stick fighting. We hopped straight into double sticks and I had to get my coordination down. I have always favoured certain sides when fighting or sparring. While fighting with my hands I almost always fight left leg in front switching when I did Historical European Martial Arts I brought right leg forward. Suddenly, I had to contend with ambidextrous drills and was pushed to get my body into alignment to intercept strikes using either leg. 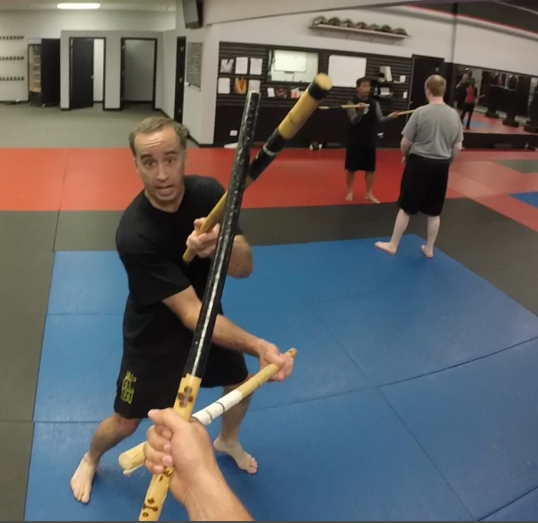 I am reminded that in a real fight my hand would be gone.


As a fighter it is great to get pushed outside your comfort zone. Having to switch sides and compensate for that discomfort is something that every fighter should go through. When I was competing I can tell you that I was constantly trying to stay in my comfort zone while pushing my opponent from his. Largely, I was very successful. However, despite this there were times that I was pushed well outside where I wanted. Being able to adapt is critical in these situations and I really felt doing the Jun Fan helps develop those skills.

What was awesome: I really enjoyed the approach to the Muay Thai and Krav Maga. During the Muay Thai class we worked on range drills. As a tall guy I love fighting at a distance and making use of my long limbs, however, this in itself wasn't special. What made the drill amazing was the instructor teaching it was a 'swarm fighter" meaning he likes to get in close and overwhelm opponents with close range techniques. Regardless, he realised that every fighter is different and needs to develop their own skills. 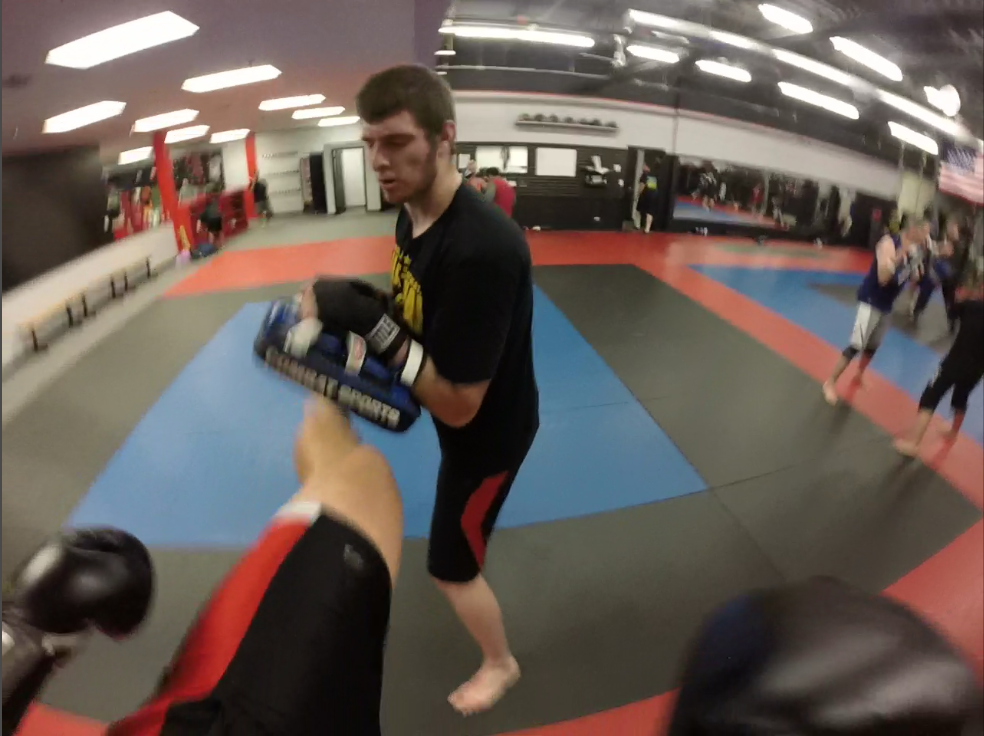 Working in a round kick as part of a multi-strike combo.

I have met many instructors that don't teach to the student and rather teach to themselves. They understand what made them good and that is all they teach. The problem with teaching this way is that it confines you to an incredibly small set of experiences. Even teachers that have fought in competitions, former police officers, soldiers, etc.. have only seen a tiny number of scenarios when weighed against the collective experience of the many. Any successful fighting program, whether competitive or reality-based, leverages multiple coaches and experiences. George St. Pierre, one of the best ever MMA fighters, has trained with Olympic wrestlers, fight teams in Montreal, New Mexico and Brazil, etc... to broaden his experiences. Krav Maga & Jeet Kune Do both have been excellent about grabbing as many resources as they can. It was great to see the NSA embraced this and keeps growing instead of being locked in its own self-aggrandizing static glory. 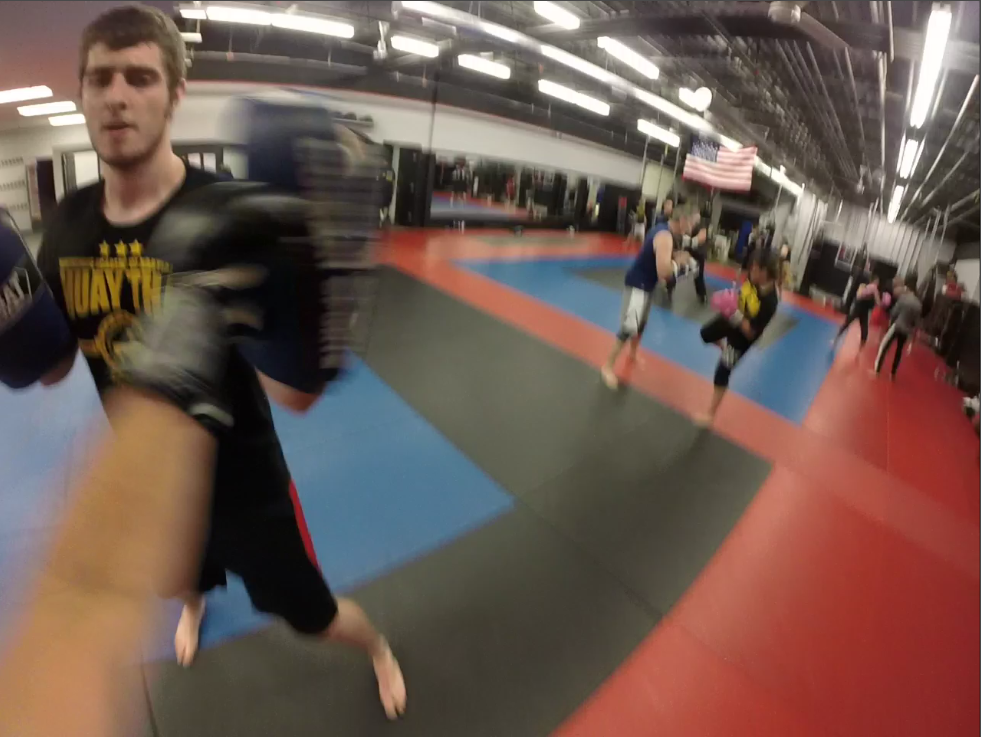 Working in long hooks to stay out at range instead of swarming in.

The other thing I really liked was the way the Krav Maga was handled. Guro Marc Halleck drilled us not only on technique but on the legal ramifications of our actions. All to often I will see instructors teaching that they need to "end the fight" without thinking about how the fight must be ended or the consequences. Marc Halleck coached us to always keep thinking as the situation progressed. Reminding fighters to constantly re-evaluate the situation and keep their use of force to within acceptable limits is very important. Sometimes I will see people get caught up in the fantasy of a Martial Art and forget that the world is an extremely diverse place. The acceptable techniques are extremely different if you are an Israeli soldier in the West Bank or a civilian at a party in Chicago. It was great to see an instructor emphasize this. 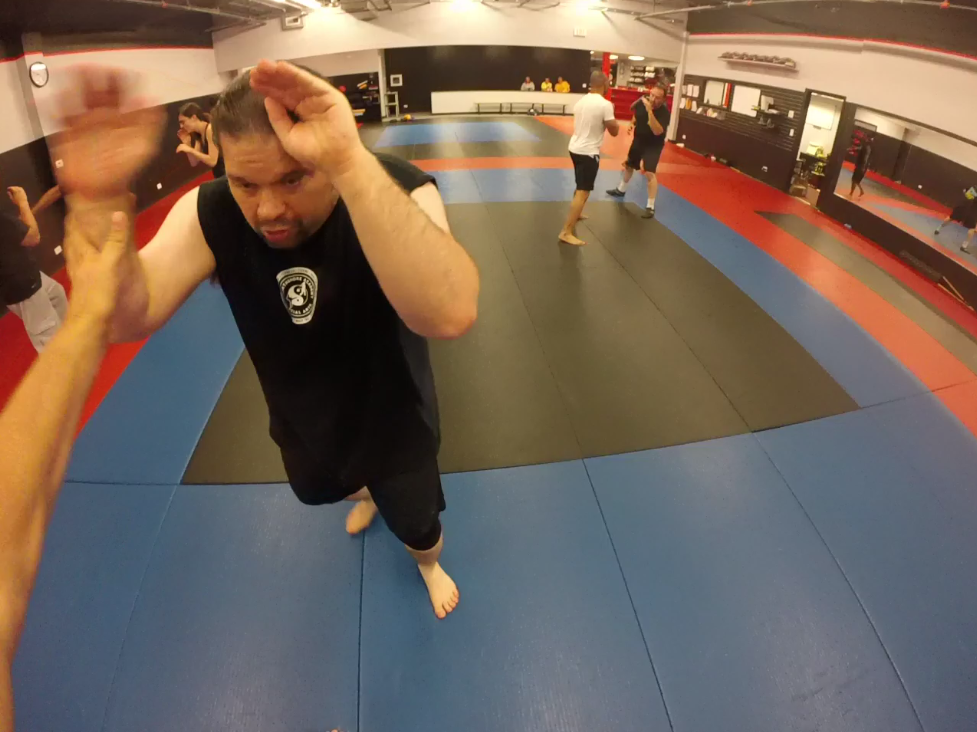 Working on some basic pummelling and defence drills.

Conclusion: Northshore Academy of Martial Arts is a great place to train. From their reliance on multiple instructors to keep the classes fresh to their breakdown of sportive and self-defence programs I had a great time. It was great to see an academy that acknowledges all the aspects of Martial Arts. 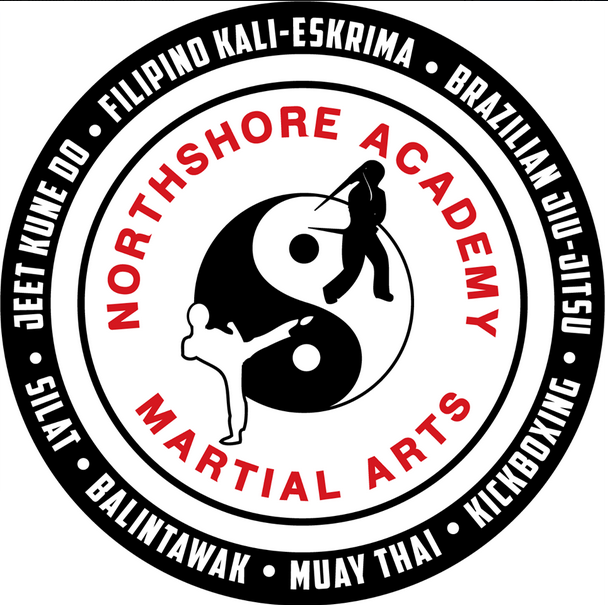 Great academy. Go check them out.

If you are interested in training together I would love to get together with you. Drop me a line on facebook and we can connect. I would love to learn from you. On Facebook: https://www.facebook.com/pages/Travelling-Ronin/583588935029877?ref=hl
On Youtube: http://www.youtube.com/playlist?list=PLwXDjTjOSVMm3-98e0gHUXLlQecYRkcvN

Go see NSA's website and more of what they do: http://nsama.com/
Randy Siordia of Wolf Martial Art's directed me over to NSA. Go look at his stuff as well. http://www.wolfmartialarts.net/

Posted by Unknown at 3:29 PM No comments:

Background: Haidong Gumdo* is a Korean sword art that is growing in popularity in North America. It revolves around the use of the Ssangsoodo, a two-handed sword that is similar to the Japanese Katana. The Hai Dong Gumbo association arose in April of 1983 in Seocho-gu, Seoul and in 1996 was incorporated as the World Hai Dong Gumdo Federation. Since that point it has slowly spread across the globe.

I was introduced to Haidong Gumdo by a friend of mine Chris Ouillet. He and his wife had been training for years and rented space at a local karate dojo to train themselves. Over time they have gathered a group of dedicated sword practitioners interested in learning top-notch skills. Naturally, I was curious to find out more about this art. 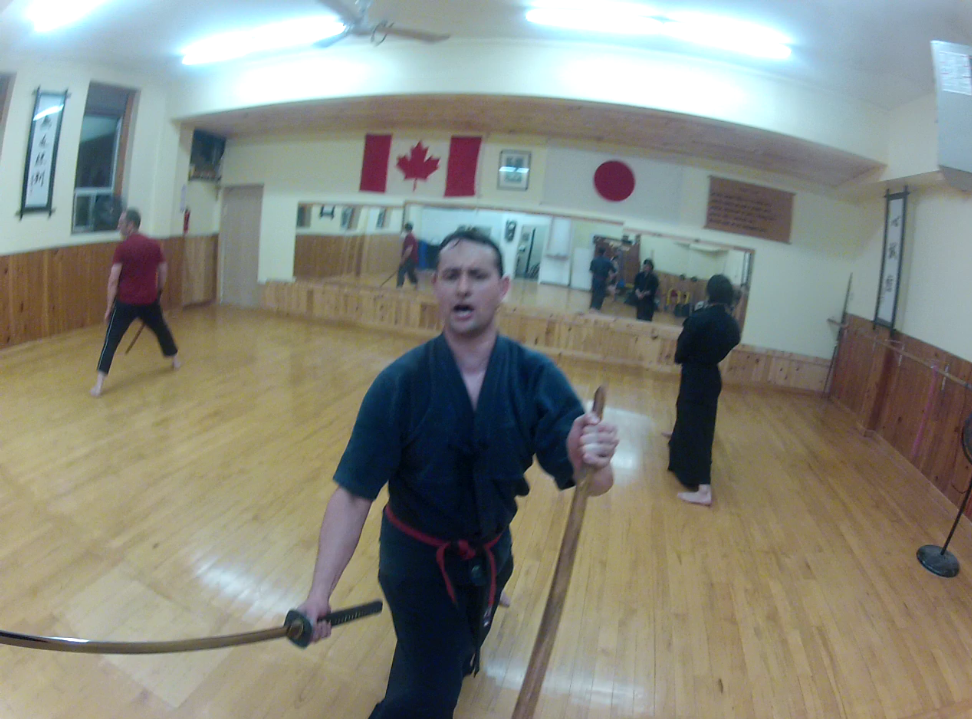 Chris yells at me to lower my stance and work my legs.

Unlike so many other of the Asian Martial Arts where they just practice their forms and slash at the air, Haidong Gumdo believes in being a fighting art. Similar to any art that carries a combat focus they are all about eliminating excess and techniques that are simply there for flowery effect. Of course there is a "pageantry" or "show" side of Haidong Gumdo that is used in demonstration, however, this is present in all Martial Arts. At its core Haidong Gumdo is a functional art.

In Eastern Canada the Haidong Gumdo tournament seen is very limited. Therefore, Haidong Gumdo fighters tend to drift across several arts from Kendo to Historical European Martial Arts. Where you find a culture that swung long swords you will find fighters of this Korean sword art. Rather than being purists the cross pollination across several arts makes them strong fighters in numerous types of combat. 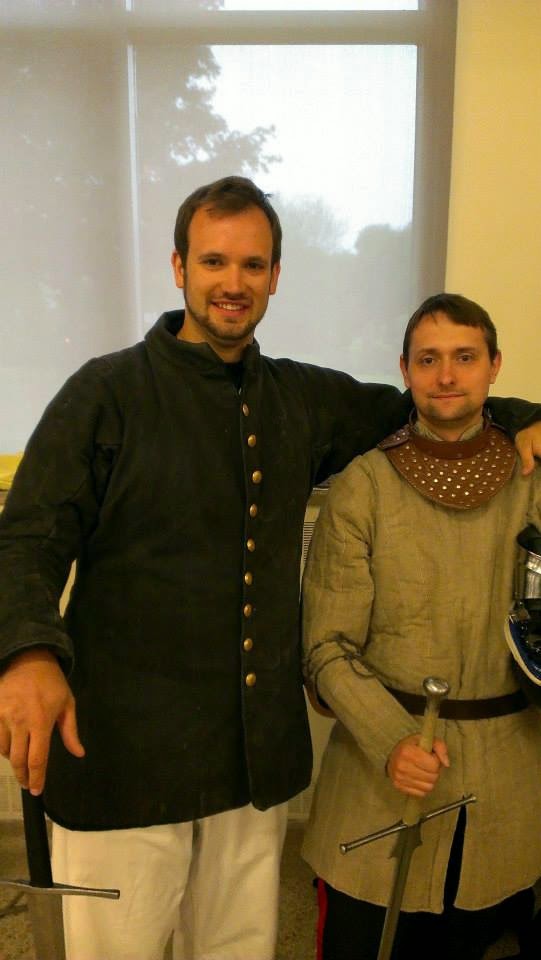 Chris and I competing at the Borealis Sword Symposium in 2013.

I joined Chris at the 2013 Borealis Sword Symposium and had the privilege of fighting beside him. Before entering the longsword division Chris gave me a number of tips that kept me more or less alive and allowed me to win my fights. Borealis was a tournament for Historical European Martial Arts but attracted the Haidong Gumdo fighters. You can also find them at other tournaments like Longpoint in Boston and other tournaments beyond practising and perfecting their craft. 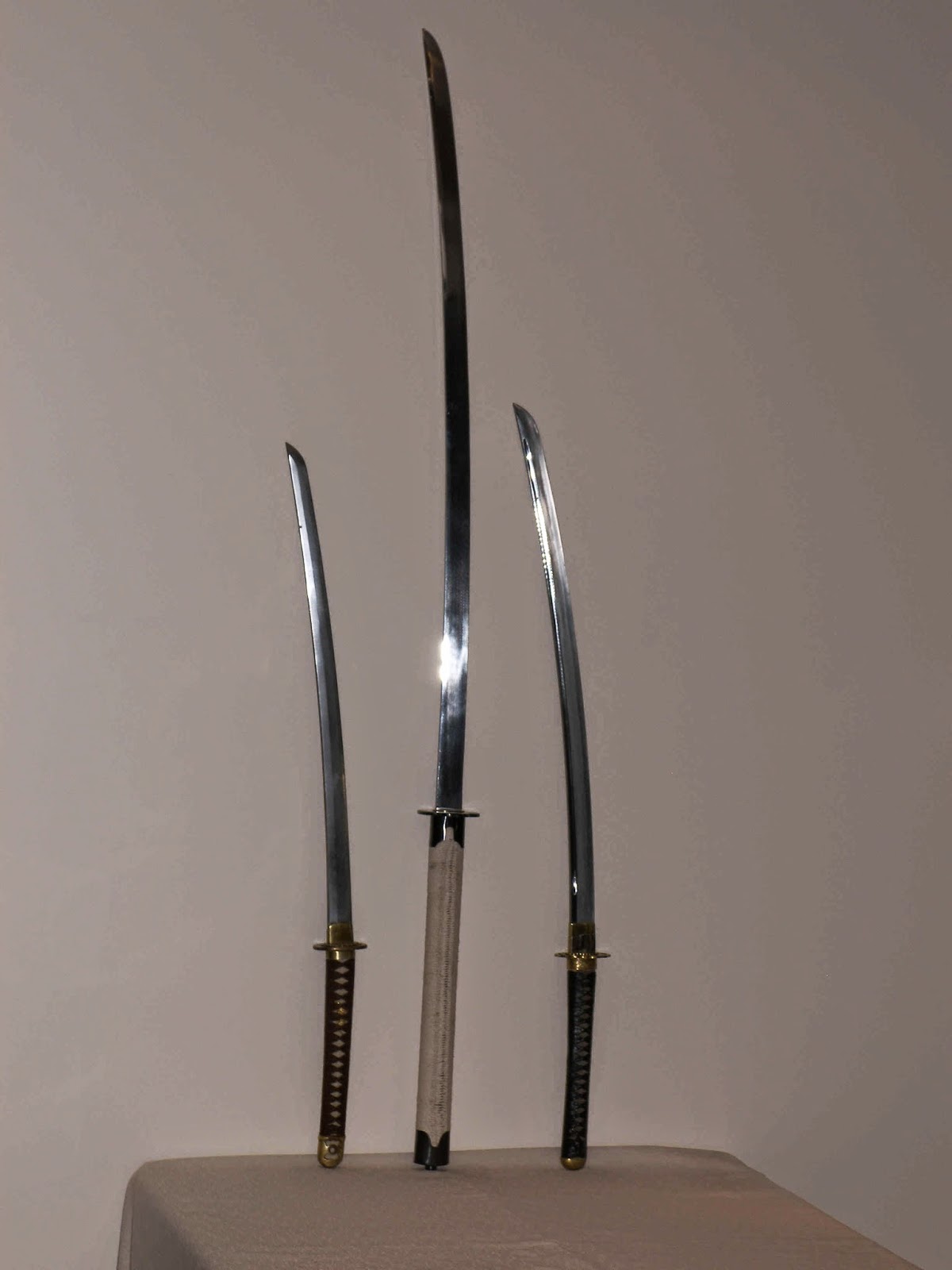 The Ssangsoodo is the sword in the center and is flanked by Katanas.

What did I learn: Obviously, I come from a background of fighting with my hands so fighting with weapons is largely new. I have taken three months of Historical European Martial Arts with a great group in Montreal called Arte Dimicatoria and they taught me a lot but I am still the most basic of beginners with the bladed arts. Spending a couple of hours working on my fundamentals is invaluable to me. From basic stances to beginner cuts, spending time working these techniques ups my survival rate. 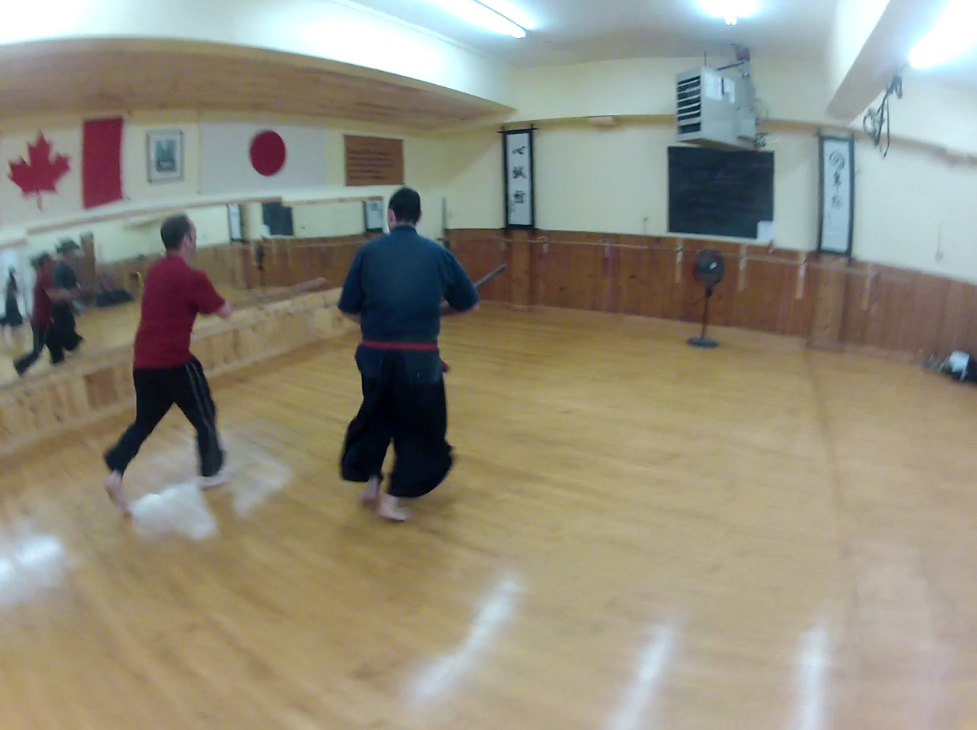 Footwork and speed are crucially important as I lag behind.

Unlike the striking and grappling arts, bladed arts are terribly unforgiving to mistakes. You can roll with a punch or fight through a submission attempt but you cannot fight through a sword cut. Massive trauma begins to shut the body down and limits someone abilities to fight back. With a focus on moving fast, getting in and getting out, Haidong Gumdo does its best to keep it's fighters alive and safe. 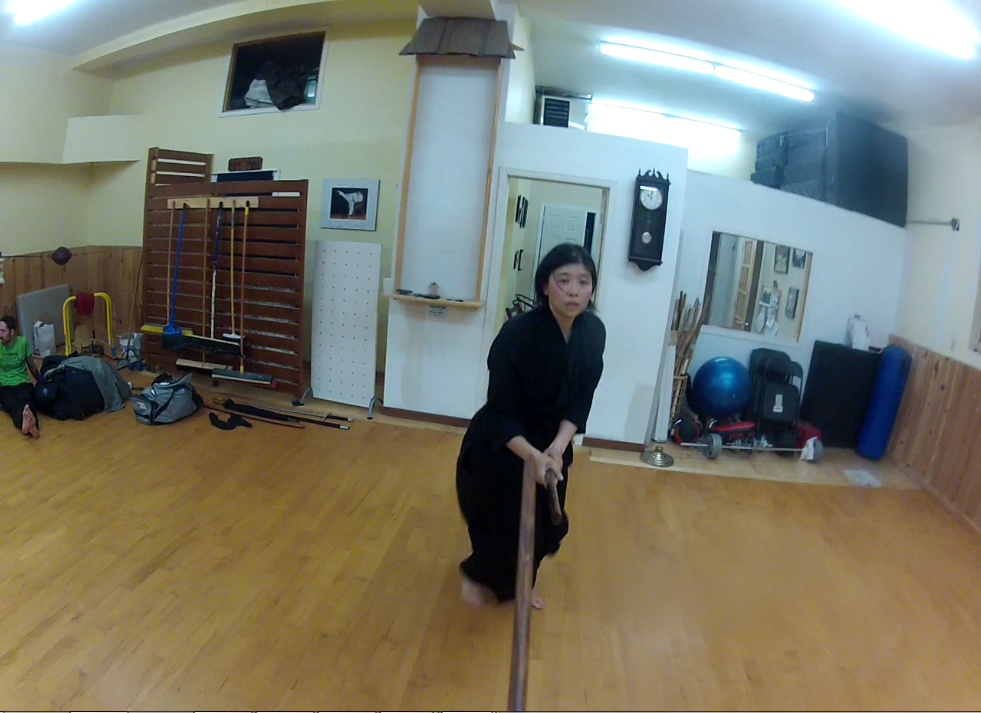 I get pressured to keep my range during a spacing drill.

What was Similar: Immediately, I was impressed by the work ethic of this group. Although they say that they're a casual group just training for themselves they carry themselves like anything otherwise. They have a dedicated training plan that they follow that brings them through cardio, strength training and basic techniques. With the conclusion of their fundamentals they suit up and begin sparring and other combat techniques.

Solid foundations are worth more than all the advanced techniques in the world. If you don't have sound footings for your fighting style it crumbles under pressure. I have spent countless hours throwing jabs to perfect my striking. Haidong Gumdo is no different, hence all those basic cuts that we warmed up with. It was great to see that even in this small group didn't shrink the easy to forget basics. I challenged Chris to a ridiculous fight with foam staffs since I lacked protective gear.
I was cut to pieces.

Conclusion: Sometimes who you train with is what you defines you as a Martial Artist. It doesn't require the biggest gym or a thousand people that are just interest in showing up. You need dedicated people who strive to better themselves each and every time they train. 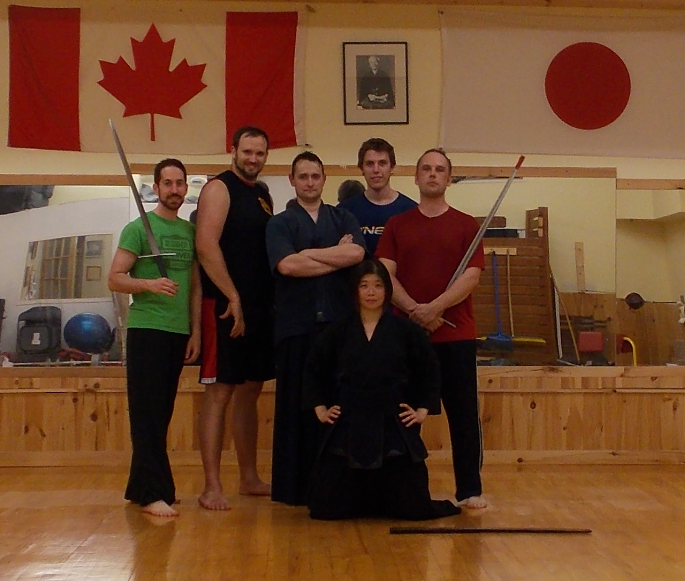 An evening training with great people.

*I found "Haidong Gumdo" spelt in numerous fashions, Hai Dong Gumdo, Haedong Gumdo, etc... I chose to use the spelling Haidong Gumdo unless an association or group spelt it differently.

If you are in Ottawa and want to train with a great Haidong Gumdo group?  Give Chris an email: rabbit.of.war@gmail.com
Posted by Unknown at 8:17 AM No comments: