In Defense of the McDojo

"McDojo," a word that makes that skin of Martial Artists crawl. It is synonymous with poor training, bad quality classes and instructors that are teaching unrealistic methods that transcend the boundaries of reality and into fantasy. These institutions are the bane of the true Martial Artist as they dilute the standards, cheapen the accomplishments of those putting in real time and churn out black belts just for showing up. While many people characterise McDojos as anchors dragging down the arts very few will acknowledge that they actually help all of us float.

What is a McDojo: Since the "McDojo" is such a dreaded force in the community they should be easy to define and clearly visible. However, in practice the "McDojo" tends to be any other school than the one you are currently standing in. This reasoning is simple. Most Martial Arts Instructors believe themselves to be teaching quality lessons and distributing the "correct knowledge." Ignoring the subjectiveness of "correct knowledge," teachers are genuinely good people that want to help their students. However, explaining the differences between their programs and other programs can be challenging. The easiest way is to label your competitors a "McDojo."

Martial Arts can generally be divided into three broad pillars. The first, Traditional Martial Arts (TMA) that can trace their lineage back through time. These might include Karate, Wing Chun, etc... The second, Reality-Based Martial Arts (RBMA) focus on self-defense and the modern world. Krav Maga and Systema are good examples of RBMA. The third, Sport Martial Arts (SMA), focus on the competitive aspects of an art and testing your ability to apply it in a controlled circumstance. Mixed Martial Arts, Judo and Taekwondo all have strong sportive elements. 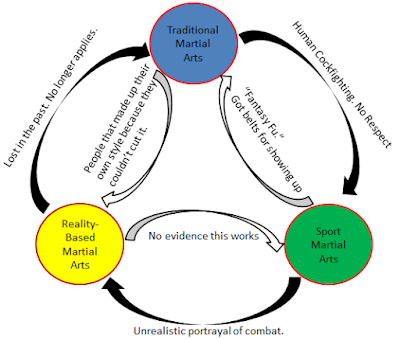 Example of how the three pillars argue.

Each of the three pillars has arguments against the other pillars in order to turn them into "McDojos." Peeling back the layers and diving deeper you will find many schools even consider other schools in their pillar "McDojos." People will argue that "School X" is what gives their Martial Art a bad name. Of course their own school is redeeming it but there is only so much good they can do.

Why is the McDojo good? Follow The Money: Money in Martial Arts is already a contentious subject filled with a differing views. Ergo, it becomes necessary to split the the term "Money" into two parts. The "Martial Arts Industry" and "School Financing." Since School Financing is so varied and doesn't affect all Martial Artists as a whole we will look past it to the Industry.

If we define the "McDojo" as a place where there would be Martial Artists, those with little to no skill or knowledge of the arts, gather in great numbers and boast arrogantly of their knowledge then there is a place that has dominated the scene since 1993. It is, of course, the bar on UFC Fight Night. Here is a place where all the three pillars come together to discuss their love or anger towards sport fighting. Now, it has to be said that MMA fighters are amazing Martial Artists and this isn't a dig at them. Rather, go to any bar on fight night and listen to the fans. You will hear "Table Ninjas" who have never trained beyond watching videos and fights offer advice on how they would hit harder or escape a submission. The bar is the truest "McDojo" there is. 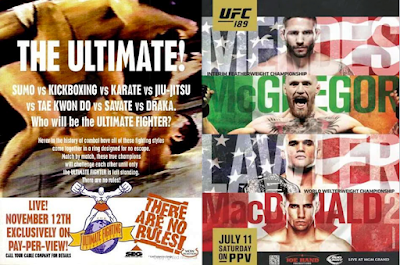 22 years later the bar is the biggest "McDojo" there is and it's a good thing.
All photos courtesy of Google Image Search.

This explosion of growth has benefited all the Martial Arts Pillars. In my travels I have seen that almost every school has taken gear from other schools. For example, you will find MMA gloves in TMA Schools across the globe. The cost of training equipment has plummeted to a point BJJ Gis are being given out for free upon joining a school. Furthermore, companies like Cold Steel now produce a huge selection of affordable training weapons thanks to volume. Overall our equipment is better and cheaper than ever which drives schools to be better and safer on all levels. 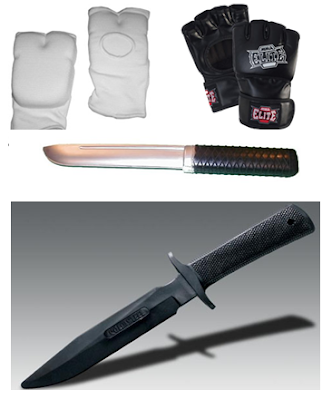 I remember training with the cheap cotton mitts that stank and rubber knives that broke if twisted.
Today for the same price I can acquire superior hand protection at Walmart and unbreakable knives.
All photos courtesy of Google Image Search.

This surge in demand has inspired video games, cinema and television to feature Martial Arts. Not only are pro-athletes jumping from the ring to film like Ronda Rousey and Randy Couture to shoot action sequences but actors are learning Martial Arts and representing them on screen. Lucy Liu practices Kali which she brought to "Kill Bill" and Robert Downey Jr. took Wing Chun to Sherlock Holmes. Even Presidents are getting involved with Obama practicing Taekwondo and Putin practicing Judo. 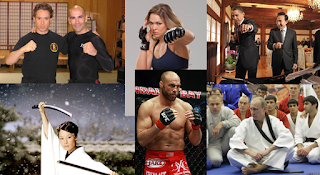 When Obama was given a Black Belt by South Korean President Lee Myung-Back or Putin was awarded his 8th degree black belt by the Kyokushin-kan International Honbu it helps drive people to schools. Both promotions were political in nature but those "McDojo" moments get people talking about training. Whether you agree or with his politics how cool is it that you can watch President Obama's Blue Belt Test at Gracie Barra  (Sorry. The last one is a hoax. I guess you can't trust the internet.)?

Conclusion: You get the privilege of deciding where you fit into the pantheon of Martial Arts. Are you Traditional or Sportive? Maybe you like the self-defense of militaries and police officers? Perhaps you fit somewhere in between. "McDojos" are subjective to individual expectation and desire making them a personal definition instead of a fixed term.

Next time when you see that school that has a hundred students in their rainbow assortment of belts throwing the sloppiest techniques you have ever seen don't belittle them. Stop thinking, "What a belt factory. I am glad I don't train at that McDojo." Instead say, "Thanks McDojo. You aren't for me but you sure make my journey easier."