Background: I started my Martial Arts journey with Goju Ryu Karate as a child back in Calgary, Alberta at a local community center. It was my first foray into the world of Martial Arts and my first exposure to tournaments where I won a bronze medal for sparring. Ultimately, I would get as far as my green belt before moving on to something new as fickle-minded children often do. After two decades away for the Goju Ryu I have forgotten just about everything I ever learned. It was a good thing I ran into The Karate Studio.

I have loved Karate for a long time. I was a passionate supporter when Johnny Rhodes came out to represent Karate in UFC 2. With fighters like GSP and Lyoto Machida rising to the top of the MMA world I was delighted to see Karate taking the center stage and showing the Traditional Martial Arts were still very relevant. The Mixed Martial Arts scene was exploding with the styles represented by athletes that I had grown up with. 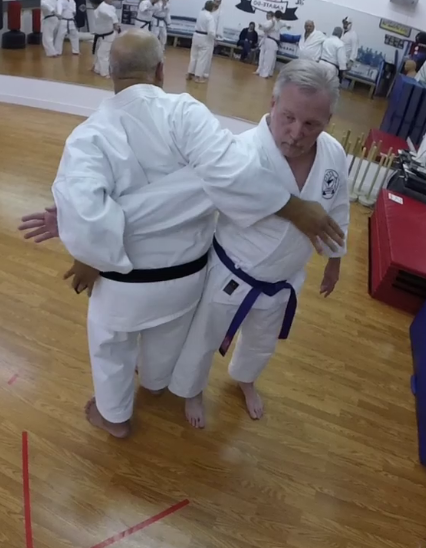 However, my love affair with Karate was cold when it came to writing this blog and filming the "Fighter's Eyes" series. Karate schools have been incredibly unreceptive to the idea and despite numerous attempts I had yet to find a school that was opened and accepting. On a whim I decided to drive to The Karate Studio while I was in Myrtle Beach. What I found amazed me.

Shihan Nelson Melendez welcomed me in and within seconds of explaining the project invited me back the next night without any hesitation. He had travelled all over the world with the military and personally learning from some great masters. By the time I left the Dojo I couldn't wait to get back in. 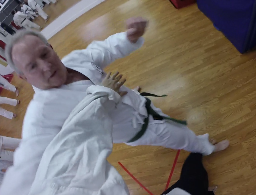 I execute one of the throws we worked on.

What did I learn: There were numerous lessons I took away from The Karate Studio. However, the biggest one I would mention is the way class was taught. Many of the lessons that were taught took the skills we were learning and broke them down to a component level and then built up. This way of isolating certain aspects of techniques allowed you to slow the movements down, build on the foundation and finally, explode when the time came. 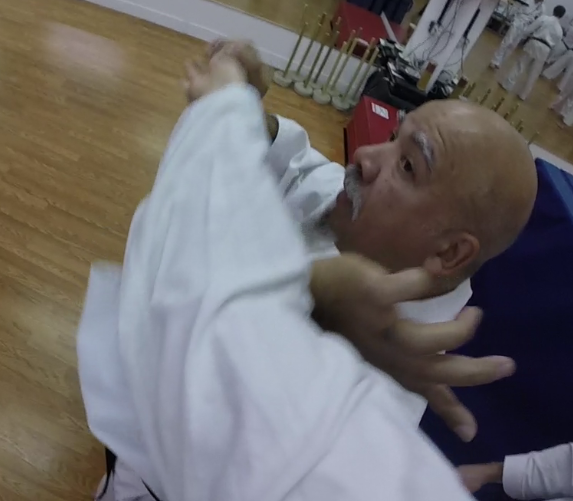 Shihan Melendez extends my arm for the break.

An obvious criticism leveled at many Karate schools is to look at drills and say, "that isn't how you will fight." This is completely true as you will never fight like all the drills that you do. However, without working these drills in isolation you might not learn the necessary muscle memory to execute them under pressure. I have witnessed fantastic Martial Artists in all types of competitions fold under pressure and not have the muscle memory to fall back on. They have to think on their basics making them slow and beatable. I was incredibly impressed with how hard students of Karate drills those techniques to make sure they don't fail under pressure. 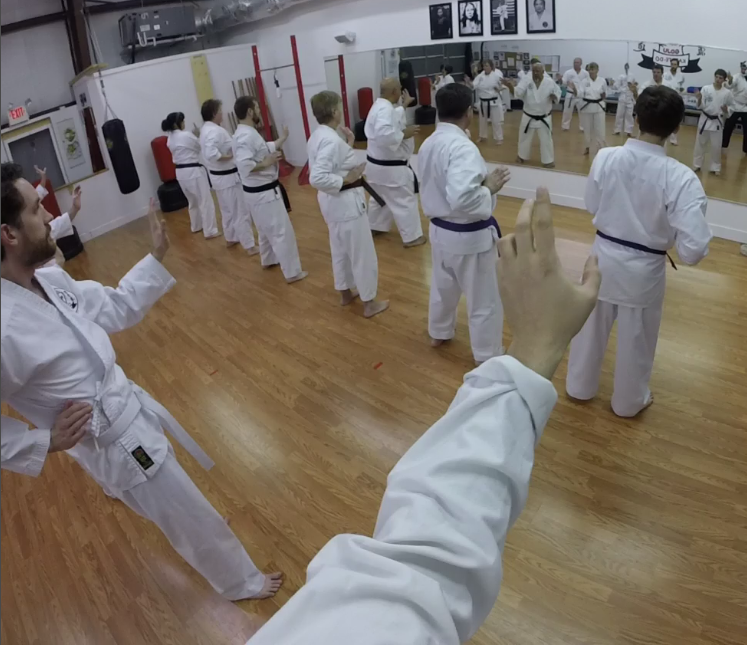 Practicing drills in isolation before working with a partner.

What was Awesome: Something that always stands out in a school is when the instructors have practical experience. Shihan Melendez was both a soldier who spent time in Korea and had a distinguished career as a Law Enforcement Officer with the Department of Adult and Juvenile Detention in Seattle, Washington. You could see that knowledge at work in the way the class was structured and taught. 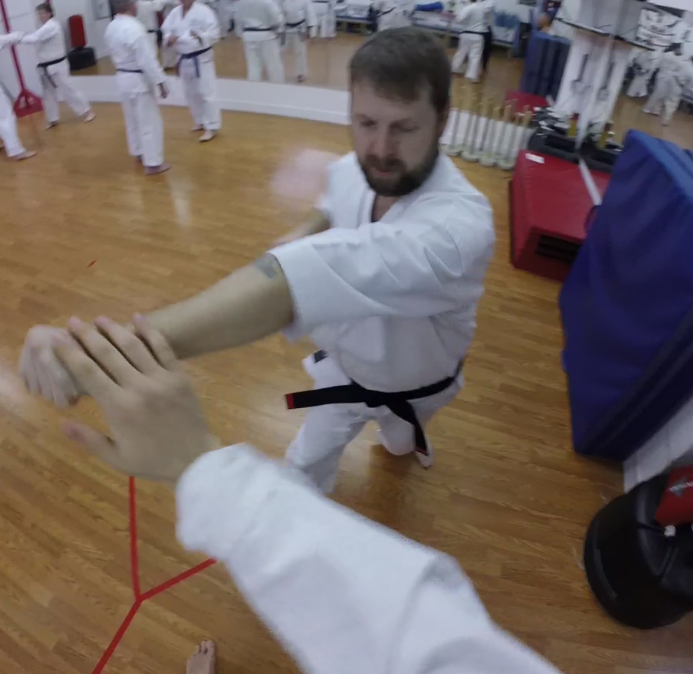 Moreover, the experience lead the instructors to focus on practicality over aesthetics. In Goju Karate you won't see a lot of flashy, overly complicated movements. Instead you get solid, direct techniques that come together with razor precision and focus on subduing an opponent. Having fought in numerous tournaments I can appreciate the emphasis on this approach. 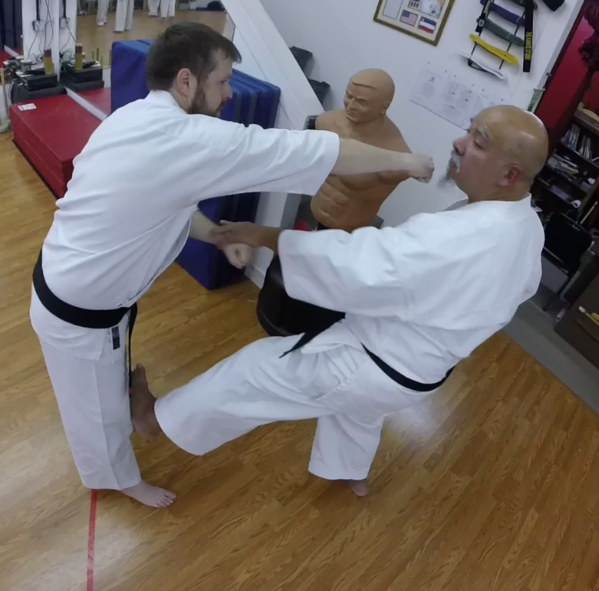 Shihan demonstrates that without structure and mobility you get hit
even if you are successful with your strike.

Conclusion: Chojun Miyagi, the founder of Goju Ryu, said, "the ultimate aim of Karate-do was to build character, conquer human misery and find spiritual freedom." I think he would be proud of the Karate Studio. Shihan Melendez offers courses to all people regardless of colour or creed and often holds classes for the underprivileged. It was great night to get back to my roots and The Karate Studio was right group of people to do it with. 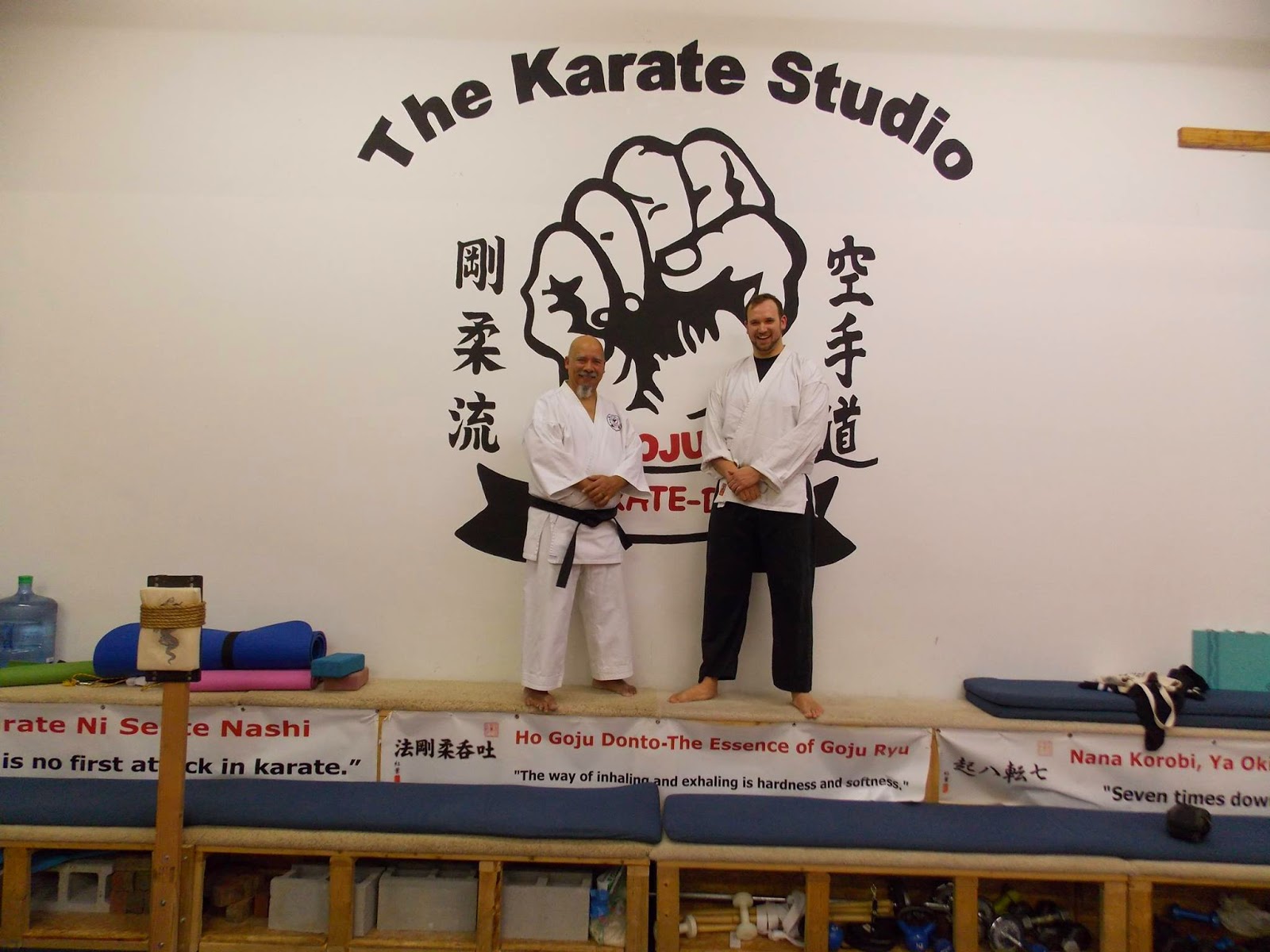